Membership-based private aviation start-up Wheels Up unveiled the exterior livery for its planned fleet of Beechcraft King Air 350i turboprops. France’s Happy Design Studio devised the blue-and-white paint scheme for the New York-based company in just 15 days. Wheels Up placed firm orders and options on 105 King Air 350is last month and expects deliveries to begin next month. According to founder and CEO Kenny Dichter, the company is continuing talks with a shortlist of two prospective operating partners. One of these will be selected to operate the King Airs on behalf of Wheels Up, with the twin turboprops destined to be distributed across seven or eight “regional clusters” around the U.S. Beechcraft will oversee the painting of the Wheels Up aircraft and was involved in the accelerated creative process, which started with three main designs based on initial “mood words” and company attributes. The design is intended to accentuate the aerodynamic appearance of the King Airs and features the word “UP” on the tail. The Wheels Up King Airs will also feature a standardized cabin design. 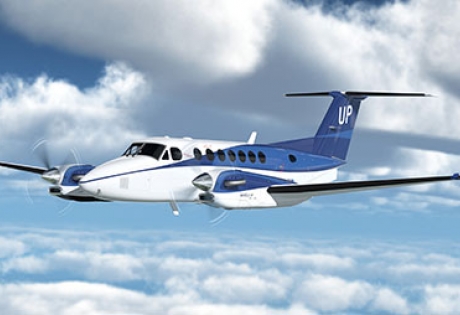