San Diego International is located 3 miles northwest of downtown on the waterfront harbor. Owned by San Diego County’s Airport Authority, this harbor airport is the third busiest for commercial flights in the US and had 25 million passengers in 2019. Formerly the Lindbergh Field, this very popular international airport has a runway of 9,400 feet.

The approach to San Diego is both challenging and picturesque. On approach, the flight plan will take you close to the skyscrapers of downtown San Diego, with a steep descent over Bankers Hill onto SAN’s single runway.  The oceanside airport is known for shifting winds and is situated in the controlled airspace of Southern California TRACON. This airspace includes the busy commercial and general aviation airports and the nearby Navy and Marine airbases.

As previously mentioned, the runway at San Diego is single, and private jets may experience delays behind commercial flights. There is a single FBO, including a terminal building for private jets and passengers at SAN.

SAN is surrounded by downtown, the harbor, Coronado, and Point Loma. The private jet facilities are located at the terminal and include rental cars, limos, and town cars. Aircraft accommodations include refueling, ramp and hangars, helicopters, and large aircraft sports charters.

The main airport and terminal buildings are open 24 hours a day, 365 days a year. The FBO is open the same 24 hours, but aircraft arrivals are allowed from 10 AM until 5:30 PM only. 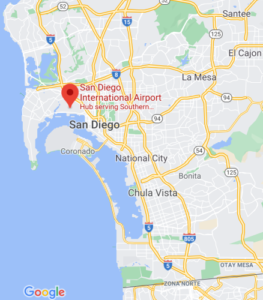 JetOptions Private Jets charters flights to and from San Diego International. Find out more about our San Diego private jet charters and private flights to Southern California. Or call us for a price quote today.