The approach to Salt Lake City is picturesque with the Wasatch Mountains to the city’s east and north, and the Oquirrh Range to the west. SLC has three long runways for commercial jets and a shorter east runway that is mainly utilized by private jets.

As previously mentioned, this east runway allows for separation between commercial and private jets in the airspace. There are two FBOs, including separate terminal buildings for private jets and their passengers at SLC.

SLC and the Great Salt Lake are northwest of downtown Salt Lake, the cities of Bountiful and Ogden are north, Sandy is south and Park City is southeast of the airport.  Private jet facilities are located near the main terminals and include rental cars, limos, and town cars. Aircraft accommodations include refueling, ramp and heated hangars, deicing, helicopters, and U.S. Customs.

The main airport and terminal buildings are open 24-hours a day, 365 days a year. The FBOs are open the same 24-hours daily. 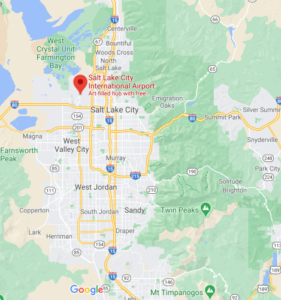 JetOptions Private Jets charters flights to and from Salt Lake City International. Find out more about our Utah private jet charters and private flights to Salt Lake and Park City. Or simply call us for a price quote today.