The airport is located in the Orange County area, just three miles east of downtown Orlando. Orlando Executive Airport is conveniently located close to the Florida State Road 408 East-West Expressway. It is also known for its convenient amenities and efficient layout with no scheduled commercial flights. Its two asphalt runways are in excellent condition. The airport is also home to a variety of aviation industry events, most notably the static aircraft display of NBAA.

Orlando Executive Airport (ORL, KORL)  is a public facility located three miles east of the downtown Orlando, in Orange County, Florida.  Disney World is about nineteen miles from the facility and Orlando International Airport is 11 miles south. Charter and fly to Florida by private jet charter rental with us. JetOptions charters flights to Orlando Executive and more than 5,000 airports throughout the U.S. and worldwide. 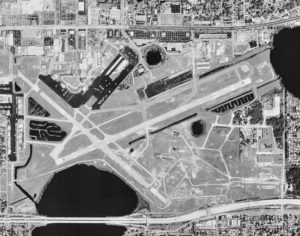 The Orlando Executive Airport is a major economic generator in Orlando. According to the Florida Department of Transportation, it generates an annual economic impact of $191 million. It also supports more than a thousand jobs, with an estimated payroll of $62,280 per month. The Greater Orlando Aviation Authority operates this public airport. It was originally known as Orlando Municipal Airport, and opened in 1928. It was used by the USPS and the US Army Air Corps until it was released to the City of Orlando in 1946.