JetOptions has private jet services for Olympia Regional Airport. Anytime you’re flying to or from Olympia, Washington, call us for flight services that are second to none. Travel in the manner you want. Airports have changed, and it’s time to upgrade over flight delays, crowded security lines, and personal protection difficulties associated with large groups. Why not opt for the advantages of private jets at OLM? As a relaxed way of flying for business or vacations, private jet charters are the first choice for reservations today.

Owned and operated by the Port of Olympia, the airport is about 4 miles south of Olympia’s downtown, in Tumwater. A former part of McChord Air Base, today the airport is used for business jet travel and general aviation. OLM has an FAA tower, fixed-base operators, and two runways. 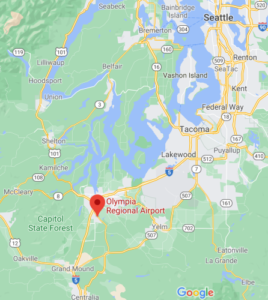 The two-runway airport is four miles south of downtown Olympia along Hwy-99 and Interstate-5. Downtown Tumwater is about two miles north. On the south edge of Puget Sound, Washington’s capital city is on the Budd Inlet. The Washington State Capital is a destination known for its historic waterfront and famous artesian wells.

Want to travel to or from OLM in a refreshed way? Then you’ve arrived at the right place. At JetOptions, we offer premium private jets from all Washington airports, and we manage all of your flight needs.

Book with us and enjoy convenient and comfortable travel every time you fly. Journey to your choice of airports in Washington State, including Sea-Tac, RNT, BFI, PAE, and BLI.