JetOptions Private Jets provides exclusive charter services to Honolulu and airports everywhere, including Daniel K. Inouye (HNL). Whether you’re flying from the mainland or Asia-Pacific, we deliver you in the safety, luxury, and style you deserve. Skip the crowded terminals, the lines at TSA, cancellations, and connections by flying private. Simplify your travel schedule with your choice of premium private jet charter aircraft to and from Honolulu International Airport. Request a jet charter price quote today.

Daniel K. Inouye International Airport or Honolulu International Airport is Honolulu’s primary aviation entry point on Oahu and the State of Hawaii. It’s one of the busiest airports in the US, with more than 21 million commercial passengers traveling through the airport each year. HNL is located northwest of the city and is also one of the busiest airports, with more than 21 million passengers annually.

The airport is 3 miles northwest of Oahu’s central business district and traveling by car; it’s 8 miles to Waikiki Beach. 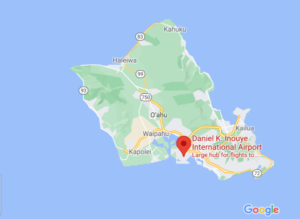 The airport includes over 4,520 land and sea acres covering a giant landmass larger than nearby Waikiki Beach. There are four significant runways, which operate in conjunction with neighboring Hickam Air Force Base. The main runway designated 8R/26L, also known as the Reef Runway, was the world’s first principal runway constructed entirely offshore. In addition to the four paved runways, HNL has assigned offshore runways for use by seaplanes.

There are many FBO operators at Honolulu Airport along Lagoon Drive on the airport’s southeastern side. These FBOs include private terminals, hangar space, rental cars, and ground transportation. Larger terminal facilities are at Signature Flight Support, Air Service Hawaii, and Castle & Cooke Aviation.

JetOptions Private Jets charters for Honolulu, Hawaii, and private flights to Hawaii and the Islands. Enjoy ARGUS and Wyvern security with the leaders in private air charters. Call JetOptions today for your next booking. 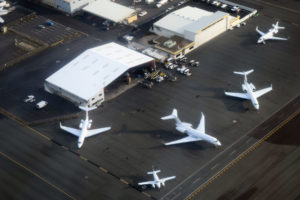 Honolulu opened in 1927 as the John Rodgers airport named for the World War I naval officer. John Rogers was the first full means airport in Hawaii; previously, there were a few landing strips and seaplane ports. The airport began its expansion in 1939 with the dredging of Keehi Lagoon for seaplanes, while the soil was moved landside for the airport. After Pearl Harbor, Rogers Field was designated as Naval Air Station Honolulu and controlled by the U.S. Navy. Commercial flights were limited during World War II, and Rogers Field returned to the territory of Hawaii in 1946.

HNL received an international designation in 1951 due to its convenience as a transpacific stopover point. It was one of the largest airports in the United States and was renamed the Honolulu airport in 1947. In 2017 the airport was renamed for the US senator and medal of honor recipient Daniel K. Inouye. Travel Hawaii with JetOptions Private Jets and request your private jet charter quote today. 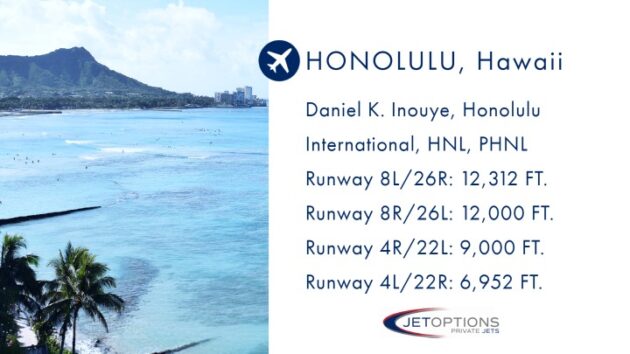