Farnborough Airport is located in Southern England near Woking, Guildford, Basingstoke, Reading, and Bracknell. Although this airport is outside London’s central hub, it offers various convenient services. Many companies offer private flights to and from Farnborough, and one such is JetOptions Private Jets. You’ll find cost-effective London flights, empty-leg flights, and chauffeur and catering when you book your private jet charter with us.

Farnborough Airport is dedicated to business aviation, making it an ideal location for business travelers who need premium travel connectivity. The airport features an impressive terminal building and a vast aircraft hangar that can accommodate various aircraft. This business aviation center also features a complimentary terminal and ramp Wi-Fi. The airport offers several lounges for passengers and crew members, and the facility is equipped with a dedicated concierge team. With the latest in airport technology, a smooth travel experience is guaranteed—experience in-flight luxury and ultimate amenities when renting a heavy jet charter for London flights.

The Farnborough Airport is located in Hampshire, which is close to London. There are rail and motorway connections to the city, and helicopter transfers are also available. The airport is a popular place for private jets and even featured in the James Bond movie Quantum of Solace. In addition, the Farnborough International Air show was held at the airport in 1948 and has since become one of the world’s premier aviation events. The airport is also the gateway for business aviation to London. However, with the return of commercial flight services in the UK, business aviation is expected to recover quickly.

The airport’s commitment to sustainability has helped it become a benchmark for other airports. It launched its Net Zero roadmap in June, committing to being carbon neutral by 2030. It’s the first business airport to earn this status. Additionally, it has introduced Sustainable Aviation Fuel (SAF) as an alternative to Jet A1 fuel. There are more than 15 hotels conveniently located near Farnborough Airport. The airport is accessible via the M25, and it’s 40 miles away from the city center. If you’re traveling by car, you’ll arrive at the airport in about an hour and a half. You can also hop on a train to London in about 30 minutes. A private helicopter charter service also takes you to Battersea in only 12 minutes.

Farnborough Airport is home to Europe’s leading business aviation airport. It’s the site of the country’s first powered flight and has long been a hub for military aviation research. The British Ministry of Defence owned it during both World Wars. Once its airfield became surplus to military requirements, it opened to civil aviation operations. Then, in 1994, it was turned into a business aviation hub. In 2003, the airport was handed over to TAG Aviation, which also acquired the freehold at the end of 2007. 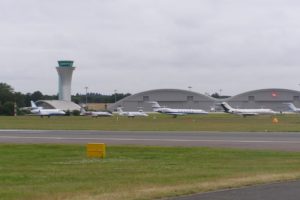