Brown Field Municipal Airport is located 1.5 miles north of the U.S.-Mexico border in the Otay Mesa neighborhood of the City of San Diego. The airport, originally named East Field in honor of Army Maj. Whitten J. East opened in 1918 as a reliever location for Coronado Island’s North Field.

A former naval base, the airport was transferred to the City of San Diego for use as a public airport.   The Otay Mountains are six miles to the east of the airport and have an altitude of 3,600 feet for flight plans over those mountains.  The inland airport has two runways and is part of the FAA-designated TRACON. This airspace includes Southern California’s busy commercial and general aviation airports and the nearby Navy and Marine airbases.

There are two FBO’s, including a terminal building for private jets and their passengers at SDM.

SDM is very close to the US Mexico border and is in the Otay Mesa community of San Diego.  Located on the south end of the county, it’s near Chula Vista, San Ysidro, Imperial Beach, and the south entrance to Coronado along The Strand.  The private jet facilities are located at the terminal and include rental cars, limos, and town cars. Aircraft accommodations include refueling, ramp, hangars, and tie-downs. 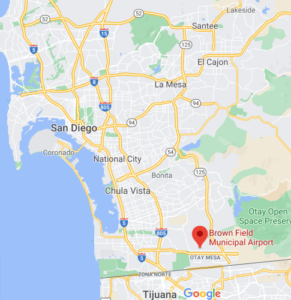 JetOptions Private Jets charters flights to and from San Diego Brown Field Municipal Airport. Find out more about our San Diego private jet charters and private flights to Southern California. Or simply call us for a price quote today.