In the past two years requests for flights to and from Vnukovo have increased by 74% in the Avinode Marketplace. This seemingly permanent fixture atop our European airport popularity list accounts for nearly three times the number of requests produced by all other Russian airports combined.  This may be the reason that the rest of Russia appears to have a stronger growth curve at the moment, showing 94% growth over the past two years.

When looking at these numbers it is interesting to note that, although Russian tails receive less requests than those in Europe, Russian brokers send, on average, three times as many requests as their counterparts in Europe.

Vnukovo is the most popular airport in the Moscow area not only by Avinode user activity, but also in terms of Eurocontrol flight data.  A whopping, 94% of all requests for Moscow area airports, in Avinode, go to Vnukovo, while the remaining Moscow airports, Sheremetyevo and Domodedovo, receive approximately 4% and 2% respectively.  This division, though not as stark, can also be seen in Eurocontrol’s actual flight movement data, which shows a market share of 74% for Vnukovo, 17% for Sheremetyevo and 9% for Domodedevo. JetOptions charters private jets to Vnukovo and has seen a request increase of 140% in the last 2 years. 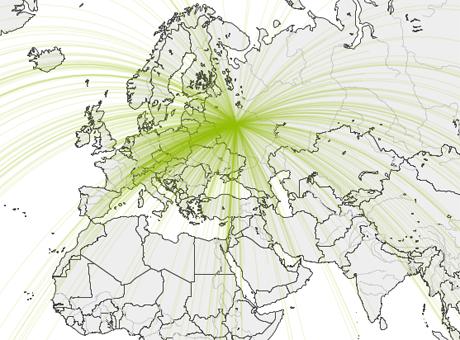 Nice, Côte d’Azur (LFMN) is by far the most common destination for flights from Vnukovo. It shouldn’t be too surprising therefore that the top arrival country for Vnukovo departures is France, but interestingly domestic Russian flights are a clear second, accepting 13% of all requested flights out of the airport.

When compared to global bizav aircraft popularity trends, Vnukovo shows clear deviations from the norm. In Avinode, the airport attracts nearly twice as many heavy jet and ultra long range requests as the global average and less than one-sixth the number of light jet requests.