U.S. Travelers Say No to Knives in Union Survey

In a recent survey conducted by Washington, D.C.-based researchers Penn, Schoen & Berland for the Association of Professional Flight Attendants (APFA), 90 percent of the 1,206 Americans questioned said the current policy of the Transportation Security Administration (TSA) on knives aboard an airplane should not be changed. The survey was conducted in response to TSAadministrator John Pistole’s decision in March to allow passengers to carry knives aboard commercial aircraft provided the blades are shorter than 2.36 inches (6 cm). That change was put on hold in early May, however, after a coalition of nine different industry organizations representing more than 400,000 members filed a legal petition with the TSA to halt the change. The coalition’s petition was adamant in its plea, “No knives on airplanes ever again.” Previously, executives from American, US Airways, United, Alaska Airlines and others issued public letters to Pistole asking that the relaxation not be implemented. The APFA survey also asked the public to weigh in on the controversial TSA statement, which implied the agency’s only responsibility is to protect the cockpit and its crew. Some 81 percent of respondents said the flight attendants hold the higher ground on the issue and that the policy banning knives should remain in place. More than half of the respondents classified themselves as frequent fliers, with only slightly more women
responding than men. Answers were for the most part also consistent across all age ranges. The survey’s margin of error was +/- 2.82 percent. 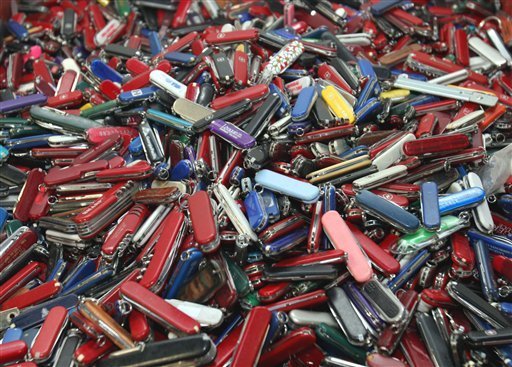 Tags: TSA, small knives on planes, knives on board