The U.S. Navy’s precision parachute team the Leap Frogs has officially cancelled its entire performance schedule for the rest of 2013, citing budget cuts due to sequestration.
The team performed at about 30 events in 2012. The Fort Bragg Patch reports that the team had some innovative ideas planned for its 2013 performances, including helmet-mounted videos and the use of wing suits. Audiences could have seen the skydivers perspective on big screens as they came back to the ground. All of that is now on hold.
Mass Communication Specialist 1st Class Fletcher Gibson told the website that “It’s pretty much fully impacted our schedule, just like the other performance teams like the Blue Angels and the Golden Knights for the Army.”  He said that if Congress suddenly changed its mind and made the funds available, the team was ready to go, “but our basic stance for the rest of the fiscal year is don’t assume the Leap Frogs are going to show up.”
Also like other teams, the Leap Frogs will continue to train, as well as assist with Naval Special Warfare Command SEALs and other students with parachute training. 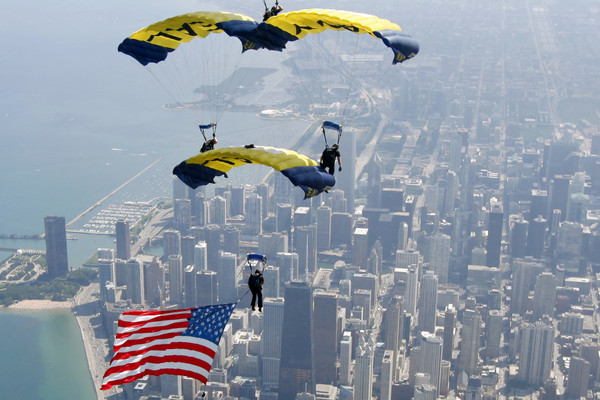