Two new Cessna business aircraft, the Citation Latitiude and Citation M2, positioned at the each end of the airframer’s six-strong light jet family have reached major ­production and certification milestones. Cessna is hoping these two products will help to re-energine this embattled sector. 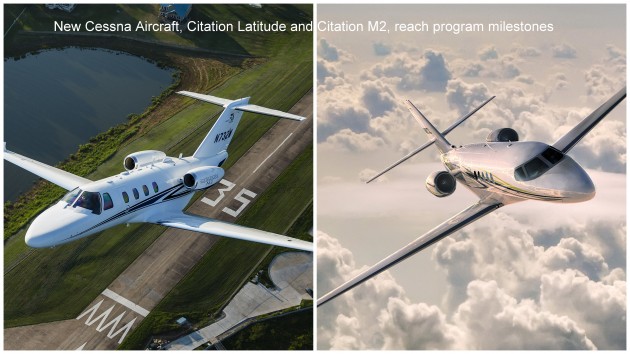 The superlight, 2,500nm (4,625km) range Citation Latitude is advancing towards certification and service entry as Cessna begins full assembly-line flow at its manufacturing headquarters. Assembly of the clean-sheet business jet includes several technological advancements, according to Cessna, such as the use of new automated robotics and ergonomically-friendly tooling stations.

“We are bringing ­technological advances to both the design of our new products and the way we manufacture them,” says Scott ­Ernest, chief executive of parent company Textron ­Aviation.

The fourth flight-test Latitude will be the first aircraft to roll off the production line. Two Pratt & Whitney Canada PW306D ­Latitudes – a prototype and a production example – have logged 230h in over 100 flights.

The third aircraft is scheduled to join the flight-test fleet before the end of the third quarter. US certification for the Garmin G5000-equipped Latitude remains on track for the first half of 2015. According to Flightglobal’s ­Ascend Fleets ­database, Cessna has a backlog for 27 Latitudes.

Meanwhile, six months after it entered service in the USA, the 1,580nm-range Citation M2 has clinched European approval, paving the way for deliveries to begin to European customers.