Tornadoes that tore through Wichita on Saturday night left a path of destruction at several aircraft manufacturers but thankfully no fatalities. Damage at Hawker Beechcraft was “limited and isolated damage to the roof” of Plant IV, where final assembly of business jets and turboprops is performed, a company spokeswoman told AIN. “There is no effect on operations,” she added. Repair is under way on the building and employees have been reporting for work as scheduled this week. Spirit AeroSystems and Boeing Wichita bore the brunt of the storm, with at least “three or four” of Spirit’s 45 buildings and “several” at Boeing hit. Production work at both facilities has been halted at least through the end of today. Spirit president and CEO Jeff Turner said that most tooling and in-process products in the affected buildings are in good shape and that production could be brought back online “right now” if not for lack of electrical power. A Spirit spokesman told AIN that the company could not estimate when full power will return. Spirit’s Wichita plant manufactures the wings for the Gulfstream G280 and G650 and nacelle systems for the G650’s Rolls-Royce BR725 engines. At press time, it is unknown how the problems at supplier Spirit will affect production of these two aircraft. Turner estimates that Spirit “will be shipping product by the end of the week,” but he was unable to say when full production will restart. 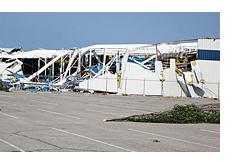