President Obama, Democrats in Congress, and Obama’s billioinaire fundraiser Warren Buffett are talking this week about a tax hike proposal that is mostly about politics, but meanwhile, the IRS just issued guidance on changing tax law in a way that is mostly about increasing profits for corporate-jet owners and Obama’s billionaire fundraiser Warren Buffett, who owns a corporate-jet company.

Berkshire Hathaway, Buffett’s holding company, owns NetJets. NetJets is a company millionaires use in order to arrange fractional ownership of private jets — time shares, of sorts. NetJets lobbied like crazy, as Ryan Grim and Ariel Edwards-Levy at Huffington Post explained last month, to change the treatment under the tax code of flights on fractionally owned jets.

Congress — mostly Ohio Republicans Pat Tiberi and Rob Portman, according to media accounts — stuck the NetJets provision into the transportation bill. The result is a “a much-reduced tax liability” for NetJets customers, and thus much higher profits for Warren Buffett. And earlier this month, the IRS began implementing this tax-law change.

I don’t know which tax treatment of fractionally owned jets makes the most sense, but I know that this episode reveals Buffett’s I-want-to-pay-more-taxes act as a political fraud. When conservatives shot back, “so cut a check, Warren,” the liberal response was “he plays by the current rules.”

Well, when it comes to private-jet owners, Buffett’s company does a pretty good job of writing the rules, in a way that makes Buffett richer, at the expense of the U.S. Treasury. 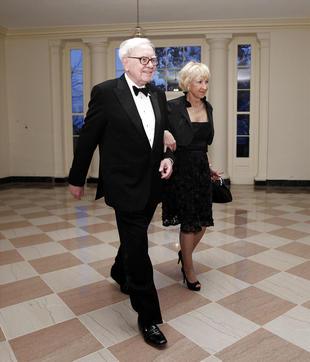