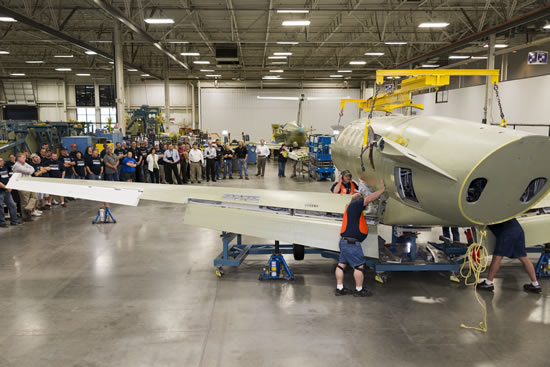 The first production unit of the new Citation M2 has reached the significant milestone of wing and fuselage mating. Certification is expected in the second half of 2013.

“The M2 program is progressing well, and we are all looking forward to advancing to the certification process and starting customer deliveries,” said Dick Friesen, Cessna value stream manager for the Mustang and M2 in Independence, Kansas. “This is the moment when we can see an aircraft take shape, and we hope it is equally exciting for our customers who want to start flying their M2.”

Wing mating is a critical juncture in the production process as it allows the team to start the engine installation phase. Wing mating also prepares the aircraft for the beginning of functional testing of the aircraft systems including avionics, hydraulics and flight controls.

The M2 was developed with input from the already strong Mustang customer base, and the engineering present in this aircraft reflects customers’ desires – resulting in a larger and faster jet with a greater range. Equipped with Williams International engines and 1965lbs of thrust, the M2 has a maximum cruising speed of 400ktas. Requiring a mere 3,250 feet for take off and landing, the M2 allows access to some of the world’s premier destinations where many other business aircraft are unable to venture.

Unlike any other business jet, the M2 is fitted by Cessna’s proprietary Intrinzic™ Flight Deck powered by Garmin G3000 avionics. The ergonomically designed passenger cabin is fully equipped for seven passengers and boasts a 1,300nm (1496m) flight range. Upon completion the M2 is expected to be certified for a maximum altitude of 41,000 feet.