The 10 Best Destinations for Fourth of July

Fly with JetOptions Private Jets to top destinations for July 4th,  Independence Day – and anytime you need the best in private jet charter. 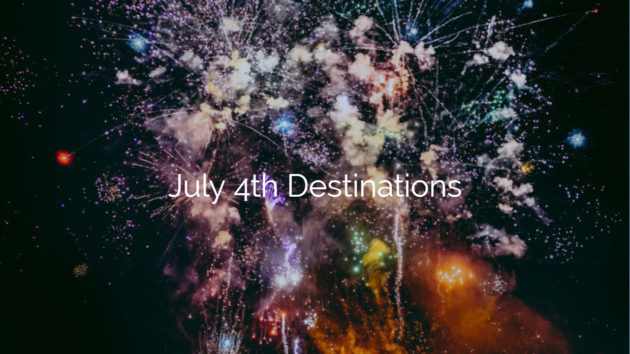 It’s one of the ideal weekends to book private jet travel on the summer calendar, the 4th of July.  Whether you prefer to spend your Fourth of July enjoying burgers and hot dogs at the beach, champagne in Las Vegas, or the natural beauty of the mountains; JetOptions will fly you there safely on the aircraft of your choosing.

Here are 10 of our favorite private jet charter destinations for July 4th.

Washington D.C.’s Fourth of July on the Mall is a world-famous patriotic fireworks show, and it’s a highlight of the Fourth celebrations. Set in the expanses of the National Mall, the capital has no shortage of viewing sites for everyone. This year’s event begins at 9:09 PM and finishes with the grand finale about 20 minutes later. Popular places for watching the annual program are spots on the National Mall, restaurants on the waterfront, and even nearby hotel suites. Hotels with waterfront and rooftop views include The Hay-Adams, Mandarin Oriental, and waterfront rooms at JW Marriott.

Summertime is peak pool season in Vegas. In addition to the fireworks extravaganzas occurring across the valley, there’s no shortage of activities – day or night. Each year hotels along the Las Vegas Strip band together for a city-wide fireworks extravaganza. The most prominent display comes from Caesar’s Palace, starting at 9:15 PM. Unlike on NYE, The Strip will remain open to vehicle traffic so expect street viewing to be packed with both people and cars. For July 4th, there is no shortage of hotel rooms, pool bars, balconies and patios with stunning views of the city lights (and the fireworks).

It’s known as the largest fireworks show in Southern California, the Big Bay Boom. Taking place in the waters of the San Diego Bay and visible from the expansive waterfront, downtown San Dieg0, Coronado and Harbor islands. The festivities launch from barges in the water beginning at 9 PM. For a small-town feel, the City of Coronado hosts its own fireworks display over Glorietta Bay at 9 pm. Round out your weekend with a stay at the Islands historic Hotel Del Coronado.

The Big Apple is planning its most massive fireworks extravaganza since the millennium Festival on New Year’s Eve 1999. This year they are designing more than 75,000 rockets and three times more firepower than ever before. The best views are near the Brooklyn Bridge, spanning Manhattan‘s Chinatown to Brooklyn’s downtown. Of course, there are always the river cruises on the East River for a stunning overwater view. This year’s show starts at about 9:20 PM from barges on the East River. Charter a private jet to New York and enjoy all the city has to offer.

The Hamptons Fourth of July’s largest display is a spectacular from the first family of fireworks, the Gruccis at the Westhampton Country Club. Scheduled for sundown on Thursday on Potunk Lane and visible from all the streets of Westhampton. “Stars over Montauk” launches from Umbrella Beach on July 4th beginning at 8 PM. July is the unofficial kickoff month of the Hamptons high season, with many food festivals, benefits, community affairs, and more special events taking place throughout towns all summer.

Celebrate in the city of roses with a visit to the Waterfront Blues Festival. This year’s festivities kick off on Thursday, July 4th in Portland’s Waterfront Park. Set along the banks of the Willamette River this event is celebrating 31 years as one of the world’s premier Blues Festivals. The fireworks show starts at 10 PM from the Willamette River and is set to a live performance of the national anthem by Andy Stokes. Featured artists at this year’s festival are Taj Mahal & The Phantom Blues Band, Grace Potter,  The Wood Brothers,  Galactic Featuring Anjelika ‘Jelly’ Joseph Lettuce

Aspen in the summertime is every bit as glorious as in the winter months. You may have to skip skiing, but there’s no shortage of outdoor activities. From hiking to mountain biking, white-water rafting is all available nearby. When you visit in July, don’t miss Aspen’s Old-Fashioned Fourth of July Celebration. Twenty thousand residents and visitors watch the downtown parade in true American style beginning at 11 AM. Due to wildfire concerns, this year’s show is going to close out with drones and lights in Wegner Park instead of explosions in the air.

Visit the beautiful and picturesque American West in this stunningly beautiful mountain town. Fourth of July celebrations include a classic downtown parade beginning at 10:30 AM. This year’s fireworks show starts at 10 PM and will be held in two locations the base of Snow King Mountain in the town of Jackson and the bottom of the Tetons in Teton Village. Round out your day with the music celebration in Teton Village at 4 PM, a Shootout in the Town Square at 6 PM, and a special edition of the Jackson Hole Rodeo at 8 PM.

Enjoy a big Texas-style Fourth of July at Houston’s Freedom Over Texas. Celebrating 30 years, this music and fireworks festival is Houston’s signature tribute to patriotism. Enjoy the fireworks from America’s Space City on Buffalo Bayou. Experience a long July weekend of summer Texas-style.

The live fireworks show begins at 9:30 PM and is visible from Chicago’s downtown waterfront. Take in the glittering reflections of the rockets’ red glare over Lake Michigan from Chicago’s Navy Pier. This famous fireworks event reaches capacity every year, and the gates close early once this occurs.

JetOptions Private Jets flies private jet charter flights for Fourth of July travel and destinations across the United States and the world. Book with confidence. We are a Better Business Bureau A+ rated, ARG/US , and Wyvern registered private jet charter company.

Call us for your custom flight quote today!