State Transportation Commissioner and jet-rated pilot Jim Simpson was like a kid in a candy store.

Simpson, who used to fly his own planes on business trips, was at a National Business Aviation Association conference at Teterboro Airport June 7, roaming the tarmac amid dozens of gleaming new corporate and personal aircraft.

“No pictures of me boarding a private jet with a woman who’s not my wife,” joked Simpson, who followed a high-heeled aviation executive up the stairs of a $56 million Gulfstream G550, before ducking into the plane’s roomy wood and leather-trimmed cabin.

The state Department of Transportation has jurisdiction over 44 small airports and 4,700 private aircraft in New Jersey, and Simpson was among several government and industry officials who addressed the June 7 gathering, emphasizing the key role of general aviation in the broader economy.

“It really helped me build my business,” said Simpson, who learned to fly and bought a prop plane and a twin-engine jet to shuttle between United Van Lines franchises he ran before getting into government. “I gave up golf for flying, I love flying that much.” 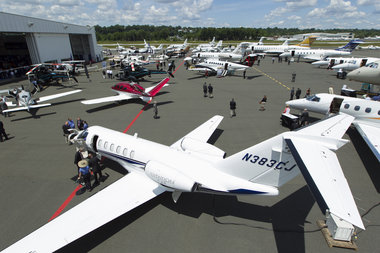 Attendees survey the offerings such as the Citation C13, at the National Business Aviation Association’s annual conference and forum at Teterboro Airport on June 7.