Super Bowl Sunday Was a Super Day for Business Aviation

While millions watched the Baltimore Ravens defeat the San Francisco 49ers in the NFL Super Bowl in New Orleans on Sunday evening, the local FBOs at the Big Easy’s airports were gearing up for their own second half as many of the more than 800 private aircraft that flocked there would seek to depart soon after the game ended. Lakefront Airport nearly reached its imposed limit of approximately 600 aircraft during the event, according to Louis Capo, executive director of the Non-Flood Protection Asset Management Authority that manages the airport. While the initial mix of aircraft was expected to be 70 percent small and medium business jets, the actual traffic to Lakefront airport included many more large-cabin business jets than anticipated, Capo noted. Landmark Aviation said its FBO hosted approximately 325 aircraft, while FlightlineFirst saw 165 jets–nearly half of them large cabin–parked on its ramp. Hawthorne Global had another 92 aircraft at kickoff. At Louis Armstrong New Orleans International Airport, Signature Flight Support had 100 mostly large-cabin business jets on the ramp during the game, while Atlantic handled more than 350 aircraft over the four-day period and had 125 aircraft parked at game time, said a spokeswoman. According to online flight data provider FlightAware, the two airports saw more than 700 general aviation departures in the 24 hours following the game’s final whistle. 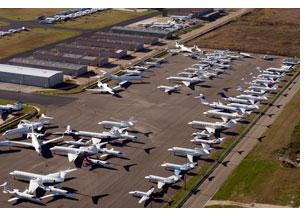