The nation’s wealthiest football fans are descending in droves on Indianapolis for Sunday’s Super Bowl, setting off a scramble by airport officials in this modest Midwest hub to accommodate the influx of private jets.

About 1,100 private planes are expected to ferry in corporate chieftains and other bigwigs to see the New York Giants face the New England Patriots in Super Bowl XLVI. That’s one of the largest fleets of luxury planes in the Super Bowl’s history, flying into one of the smallest cities to ever host the game.

Indianapolis, with a population of about 820,000, is the first city to host a Super Bowl with just one air-traffic control tower in a 50-mile radius. The Federal Aviation Administration has set up five new departure routes along with three temporary control towers—mobile units with glass-domed ceilings parked in the airfields—at nearby airports.

Michael Medvescek, chief operating officer of the Indianapolis Airport Authority, said the plane squeeze has left no spot to park a private jet within 30 miles of Lucas Oil Stadium.

Read the full story in the Wall Street Journal here. 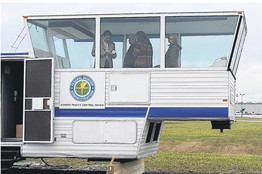