Over the last couple of months, I’ve had the pleasure of visiting both United Arab Emirates and Saudi Arabia where I was warmly greeted by our friends and members in the region and guided by Avinode’s own Middle East expert, Ian Croxton. Since visiting, I’m happy to report that the general aviation professionals we met were optimistic about the current market and its potential.

At the same time, the market is highly dependent on a relatively small group of royals, who often directly or indirectly own the charter companies. These companies then operate partly for them and partly for the ad-hoc or block programs market, which makes for a somewhat volatile and limited market.


Unusual Business Aviation activity as the heat rises in Ukraine 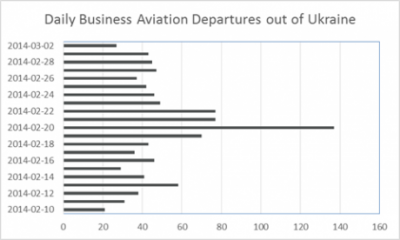 Time and again, business aviation has proven to be a vital tool when normality turns into chaos. We saw it in 2010 when the Icelandic Volcano Eyjafjallajökull erupted leading to travel chaos in both Europe and North America. Heavy Jet Operators came to rescue, shuttling passengers back and forth, providing the support Commercial Aviation couldn’t.

In early 2011 we saw it again when the Arab Spring spread like a deluge across the Arabian world and business aviation became the main source of transport for getting expats out of the hot zones.

With the Ukrainian crisis now building before our eyes, we have decided to take a look a the role our industry is playing in the growing conflict.

After months of protests on the Independence Square in Kiev by the Euromaidan movement, Ukraine was on the brink of civil war. On February 22nd the parliament voted that the president Viktor Yanukovych was no longer able to fulfill his duties, and his own party later renounced him. On February 24th a warrant for his arrest was issued. Yanukovych fled Kiev on Feb 21st first to Crimea and then on to Russia.

Delta Air Lines Flight 901 from Atlanta to Costa Rica made an emergency landing on Grand Cayman island Sunday night after a drunk groom kicked off his honeymoon by getting into a tiff with his new wife. According to the Chicago Tribune,

The U.S. citizen was escorted from the flight after it landed by Cayman Islands police and was being held in custody on a charge of drunk and disorderly conduct, according to Royal Cayman Islands Chief Inspector Raymond Christian. The bride remained aboard for the flight to San Jose, Costa Rica, he said. He did not name the bride or the groom involved in the incident other than to say the groom was a U.S. citizen.

How difficult is traveling with a stolen passport?

How difficult is it to board a plane with a stolen passport? Not as hard as you might think.

In any major international airport, it’s not uncommon to have your passport checked four times or more between check-in and boarding the aircraft. But if passenger documents aren’t checked against Interpol’s database of stolen and lost travel documents, travelers using those documents can slip through layers of security.

Reports that two passengers on missing Malaysia Airlines Flight 370 were traveling on stolen Austrian and Italian passports have highlighted security concerns that have troubled Interpol for years, the international law enforcement agency said Sunday. The flight, carrying more than 200 passengers, disappeared from radar Saturday and hasn’t been seen or heard from since.