Oil speculators’ uneasiness over the resurgence of the “Arab spring” is the main factor driving jet-A prices ever closer to–and in some cases beyond–$6 per gallon, according to aviation fuel consultant Mark Wagner. Jet-A prices in the continental U.S. are now averaging $5.64 per gallon, ranging from $3.94 in the Great Lakes region to $6.01 in the Eastern region, current data from AirNav shows. The price of Brent Crude, which is refined to make jet-A and other fuels, continues to rise and stood at $124.20 per barrel late yesterday. While declining oil demand in Europe and the U.S. somewhat counteracts growing demand from emerging countries such as China and India, the tension in the Middle East is creating uncertainty in oil markets, Wagner told AIN. “Since early October when the Arab spring started a resurgence, there have been some flows back into crude futures and they have been successful due to this uncertainty, which creates price volatility, and if you position yourself correctly you make money,” he said. “So global uncertainty fuels speculative money flows.” Wagner believes that crude oil prices are now “too high and some speculative money could leave this market in the near term,” meaning that prices might be approaching a ceiling. “Supply is apparently adequate,” he said, “and fundamentals tell us prices should not be this high. But perceptions of future risks are the drivers.” NBAA, of which JetOptions is a member has issued several suggestions to help business aircraft operators cope with rising jet-A prices. 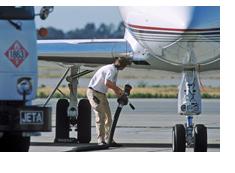