A solar-powered plane that developers hope to eventually pilot around the world is due to take off from San Francisco Bay on the first leg of an attempt to fly across the United States with no fuel but the sun’s energy.

Departure was set for 6 am local time from Moffett Field, a joint civil-military airport near the south end of San Francisco, with the spindly looking plane, dubbed the Solar Impulse, headed first to Phoenix on a slow-speed flight expected to take 19 hours.

After additional stops in Dallas, St. Louis and Washington, D.C., with pauses at each destination to wait for favorable weather, the flight team hopes to conclude the plane’s cross-country voyage in about two months at John F. Kennedy International Airport in New York.

Swiss pilots and co-founders of the project, Bertrand Piccard and Andre Borschberg, will take turns flying the plane, built with a single-seat cockpit, with Piccard slated to be at the controls for the first flight to Arizona. He is scheduled to land in Phoenix at 1 a.m. local time on Saturday.

The project began in 2003 with a 10-year budget of 90 million euros and has involved engineers from Swiss escalator maker Schindler and research aid from Belgian chemicals group Solvay – backers who want to test new materials and technologies while also gaining brand recognition.

Project organisers say the journey is also intended to boost worldwide support for the adoption of clean-energy technologies.

With the wingspan of a jumbo jet and weighing the same as a small car, the Solar Impulse is a test model for a more advanced aircraft the team plans to build to circumnavigate the globe in 2015.

The plane made its first intercontinental flight, from Spain to Morocco, last June. Read the full story here. 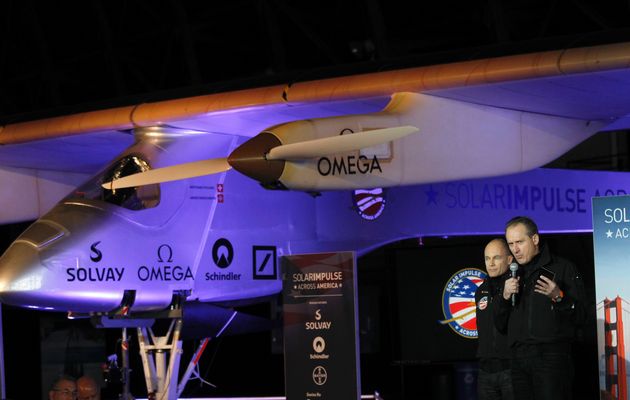