NEW ORLEANS (Reuters) – Vilified from the presidential pulpit, an occupied Wall Street , and even the Republican presidential campaign, one of the ultimate symbols of indulgence — the private jet — appears poised for a rebound.

Sales of corporate jets in the United States plummeted with the global financial crisis, and the reputation of the time-saving luxury for the ultra-rich sank even further thanks to bailout-receiving executives who traveled hats in hand to Washington on swanky private aircraft.

Confidence among the very rich is improving with the Spectrem Millionaire Investor Confidence Index. While still neutral, it is rising for the third straight month in January to its highest level since June 2011. Industry experts say demand should follow, and even a White House proposal to end a tax break for private jets has yet to damp sentiment.

“We’ve got three years of pent-up demand, and it looks like 2012 will start an uptick,” said New Jersey-based private aviation analyst Brian Foley.

From a peak of 1,313 planes delivered in 2008, total worldwide shipments of business jets fell 42 percent during the following two years, with 764 aircraft valued at $18 billion delivered in 2010, according to data from the General Aviation Manufacturers Association.

The slump has affected jet manufacturers Cessna (TXT.N) and Hawker Beechcraft, which laid off half their workforce, costing some 20,000 jobs across the industry since 2008.

During a trade show, earlier this month held by the National Business Aviation Association in New Orleans, an undercurrent of optimism tinged the banter among agents showing off aircraft ranging from a seven-passenger, $8 million Embraer Phenom 300 (EMBR3.SA) to a 13-passenger, $38 million Gulfstream 450 (GD.N).

Read the original story from Reuters. 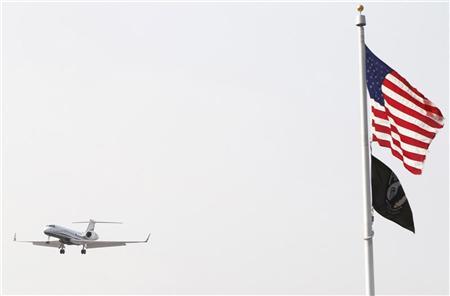