Stealthy helicopters and the still-secret RQ-170 Sentinel, a stealthy unmanned or optionally piloted, tailless flying wing, may have played pivotal roles in the raid on Osama Bin Laden’s compound in Abbottabad, Pakistan on May 1. U.S. officials twice declined to confirm for the record the type of helicopter that carried U.S. Navy Seals to the compound.

Photographs of the tail wreckage of one helicopter, which was destroyed by the Seals following its crash into the compound, show significant differences from U.S. Army Sikorsky MH-60K Black Hawk helicopters that are used to insert special forces. These include a disc covering a five- or six-blade tail rotor; modified tailboom and tailplane and a silver paint finish.

Pakistan was not alerted to the raid, and may not have detected the airborne approach of the night-raiding team. On-the-record accounts of the raid have contained contradictions, including whether mechanical failure caused the crash.

From off-the-record briefings quoted by The Washington Post and Time magazine, it seems that the raiding party flew to and from Abbottabad via Bagram airbase in Afghanistan in two helicopters, described as Black Hawks in these accounts. The helicopters might have originated from the USS Carl Vinson operating in the North Arabian Sea, to where Bin Laden’s body was removed for analysis and subsequent burial at sea.

One or more Boeing Chinook helicopters, presumably MH-47Gs, also flew into Pakistan with back-up forces, and one of these recovered from the compound those special forces members whose helicopter was destroyed. The RQ-170 might have provided communications and imagery relay during the raid.

It might also have previously flown into Pakistan airspace undetected, to provide video imagery of the compound, which could supplement surveillance from reconnaissance satellites and covert ground observations. The RQ-170 has been seen periodically at Kandahar airbase since 2008. 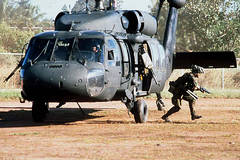