In the business world, time is money (and bragging rights). In April, the Citation X took said rights from the Gulfstream G650 with its maximum speed of Mach 0.935. Another contender could soon be on the tarmac in the form of the Saker S-1. With a design inspired by military fighter jets, US-based Saker Aircraft says its S-1 will cruise at Mach 0.95 and reach a top speed of Mach 0.99.

Former U.S. Air Force pilot Sean Gillette announced yesterday the launch of a new “personal jet” program, the Saker S-1, a twin-engine two-seater capable of flying 1,600 nm and cruising at Mach 0.95. With twin vertical fins, tandem seating and short fighter-like wings and stabilizer, the S-1 brings to mind the Aviation Technology Group Javelin. Although Saker is employing AirBoss Aerospace, the same company that helped design the Javelin, the S-1 is larger. “Our
aircraft has a similar mission,” said Gillette. “But it’s a lot bigger, with better performance and [about] 4,000 pounds heavier.” The S-1’s mtow is 11,500 pounds. Maximum altitude will be 45,000 feet, with the cabin pressurized to 8,000 feet. Gillette is targeting both civil and military markets; the Mach 0.99 executive S-1 would cost about $5 million, while the military version with an ejection seat and Mach 1.1 capability would sell for $6- to $7 million. Gillette’s team, headquartered in Los Angeles, has completed preliminary design, and he said he is close to securing funding to build prototypes and receive FAA and EASA Part 23 certification. If all goes as planned, certification would occur in the 2017 to 2018 time frame, with deliveries beginning in 2019. 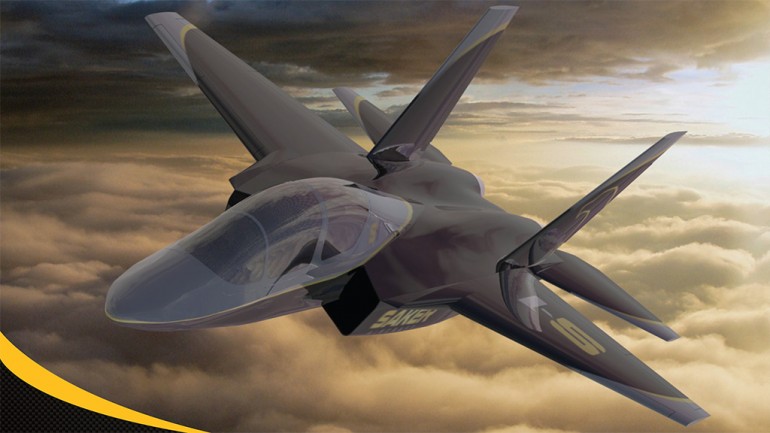