Russian billionaire Alisher Usmanov has a new toy — a wide-body AirBus A340 that is the largest private jet in Russia, and possibly in all of Europe.

Oleg Panteleyev, an editor at Aviaport.ru, a Russian website that tracks the aviation industry, told Bloomberg News that Usmanov, who recently sold $1.4 billion in Facebook stock during the company’s recent initial public offering, might pay up to $500 million for the long-range, four-engine airplane, based on how lavishly he decides to outfit it.

Depending on the model, the unit price for an AirBus 340 ranged between $238 and $275 million as of 2011, but Usmanov is not known for sparing expense. Earlier this month, the Moscow News reported that the Uzbek-born Russian billionaire spent $100 million on a new luxury yacht that includes “a swimming pool, a helicopter pad, a gym, a luxury dining room and cabins for 20 guests.”

Usmanov, who is the founder and biggest shareholder of Metalloinvest, Russia’s largest iron-ore producer, also owns stakes in Russian telecommunications and Internet companies, and in the English soccer team Arsenal.

The latter has been a source of ire among some Arsenal fans, who resent Usmanov’s possible influence on the club. According to the London Evening Standard, Usmanov’s investment company owns just under 30 percent of the club, though he does not have a seat on its board.

Usmanov is the 34th richest person in the world, according to the daily Bloomberg Billionaire Index, with a personal fortune of $15.8 billion. 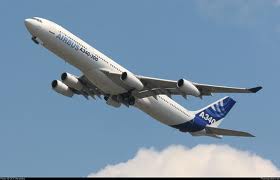