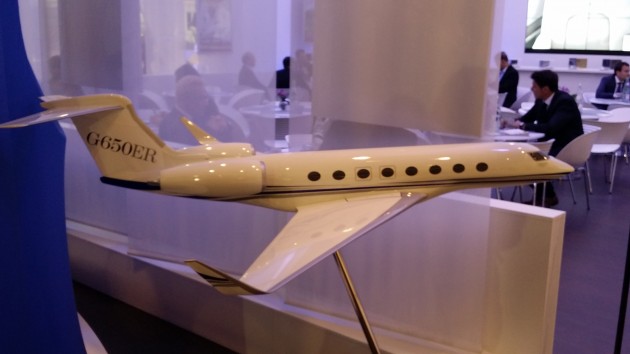 Such has been the aerospace community’s mantra practically since the birth of flight. Today, in military aviation, the culture is more about affordability and being “just good enough technologically” to get the job done. In commercial aviation, it’s all about fuel savings and operating efficiencies. In business aviation, the credo of higher, faster, farther is, well, very much alive—and no airframe manufacturer is pushing the flight envelope more than Gulfstream Aerospace.

Top of the line at the Savannah, Ga.-based company is the ultra-long-range G650, which can carry eight passengers and a crew of four nonstop 7,000 nm. That’s New York to Beijing—or if you prefer, Tokyo to Los Angeles—in record-setting time. But Gulfstream decided to take the G650’s performance to the next level with the introduction of the G650ER (‘ER,’ as in extended range). It will be able to take eight passengers 7,500 nm—an increase of 500 nm over the range of the G650—at 0.85 Mach, or 6,400 nm at Mach 0.90.

A G650ER set two speed records during flight-testing earlier this year. On one of them, the aircraft flew from Los Angeles to Melbourne, Australia—a distance of 6,947 nm—at an average speed of Mach 0.86, and landed with fuel in excess of NBAA’s instrument flight rules reserves. Flying into head winds as high as 13 kts, the trip took 14 hours and 58 minutes. The G650ER owes its speed, in part, to twin Rolls-Royce BR725 engines, the most advanced in the BR700 series, according to Russell Buxton, president, Civil Small and Medium Engines, Rolls-Royce. The BR725 incorporates technology from the Trent engine family that powers wide-body commercial jetliners.