Seattle-based performance modification specialist Raisbeck Engineering and Hartzell Propeller have unveiled a new swept-blade propeller for the Hawker Beechcraft King Air series. The newly certified propeller is the result of three years of development, according to the companies, which describe it as the first business aviation turbine propeller using practical swept-wing theory as an integral part of its design. The propellers have aluminum blades and hubs. “The overall performance improvements relative to both the OEM three-blade and four-blade Hartzell propellers are large and result in greatly improved FAA-certified takeoff, climb and landing capabilities,” said Raisbeck Engineering CEO James Raisbeck. The 96-inch diameter of the new propeller is three inches greater than that of the OEM prop installed on the B200 and B250, yet perceived sound levels are reduced slightly as a result of the blade sweep. The developers expect deliveries of the new prop, which will list for $83,400 per shipset, to begin in March. 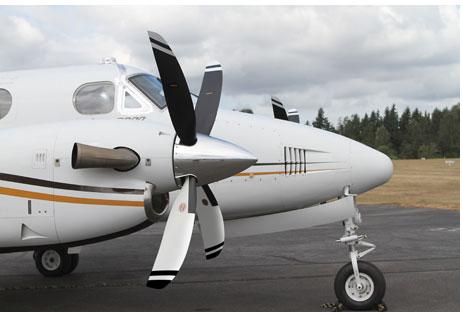