Honda Aircraft Company announced several achievements and milestones in the development of the HondaJet during a press conference at the European Business Aviation Convention and Exhibition (EBACE) in Geneva, Switzerland. The company revealed the first production HondaJet. The aircraft is ready for ground tests and features a new paint scheme, a deep pearl green with a gold stripe. The company also shared its progress in preparation for HondaJet entry into service. 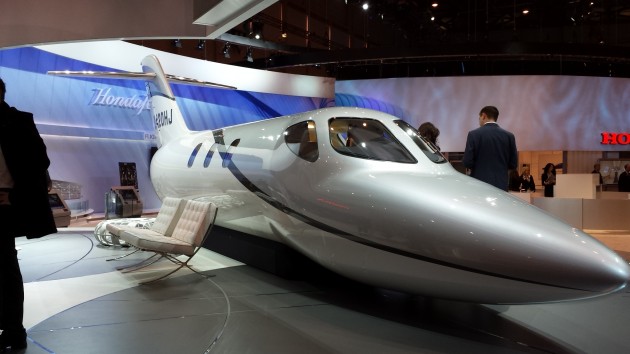 First Production HondaJet Debuts With New Color
The first production aircraft is in final assembly with the first set of production GE Honda HF120 engines recently delivered to Honda Aircraft. The engines have been installed, and Honda Aircraft will soon begin conducting ground tests on the airplane. Its first flight is anticipated this summer. The aircraft debuts a new exterior paint scheme in a deep pearl green with a gold stripe. With its debut, all five exterior color options are represented in the HondaJet fleet. The deep green finish will be offered in addition to the vibrant silver, red, yellow and blue exterior colors currently available to appeal to a variety of customer preferences.

Production Readies for Deliveries
HondaJet production continues its steady pace in advance of entry into service with nine aircraft on the final assembly line. Four aircraft have been mated to their wings and empennages, and production is on schedule to have 10 aircraft on the final assembly line in June. This steady build up supports Honda Aircraft Company’s objective to have aircraft ready for delivery immediately after type certification is achieved next year.

“The HondaJet production line is maturing with efficient and robust processes in place to build high quality aircraft,” said Fujino. “From handheld tablets that deliver worker instructions to an automatic guided cart to pick up and deliver parts, we continue to integrate the latest technology into our production process to create an efficient workflow.”