On Tuesday, President Obama nominated acting FAA Administrator Michael Huerta to lead the agency for a full five-year term. He was tapped as the acting chief in early December, after now-former FAA Administrator Randy Babbitt resigned in the wake of a drunk-driving arrest in Northern Virginia. Huerta, who was managing director of the 2002 Olympic Winter Games in Salt Lake City, was named the FAA’s deputy administrator in June 2010 to oversee the agency’s multibillion-dollar NextGen ATC modernization program. National Air Traffic Controllers Association president Paul Rinaldi welcomed the nomination. “We strongly support Huerta’s selection…[and] appreciate the many ways he is collaborating with air traffic controllers and all aviation safety professionals to improve the safety of U.S. aviation,” he said. Airports Council International-North America (ACI-NA) president Greg Principato similarly praised Huerta’s nomination. “With the passage in February of a new FAA reauthorization bill, it is important to have an administrator in place to lead the agency and the aviation community through the changes ahead, including the modernization of our nation’s air traffic control system,” Principato said, adding that in his opinion Huerta has done a good job in leading the agency since December. 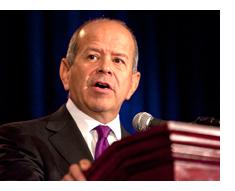