Say hello to the droneliner. A business plane has flown an 800-kilometre round trip in civilian airspace without a pilot onboard operating its controls.

Instead, the plane flew itself like an outsized drone with continual monitoring of its autonomous manoeuvres performed by a pilot based on the ground.

The flight from Warton in Lancashire, to Inverness in Scotland by a British Aerospace Jetstream is being hailed as a milestone by members of ASTRAEA, a £62 million UK research consortium aiming to develop the technology that will allow civilian aircraft to share their airspace with drones – some of which could be as big as airliners.

The flight happened back in April but the details have only just been revealed. It took off with a regular pilot and test engineers on board. But once the aircraft was straight and level, the pilot handed control  to the ground pilot and sat back for the ride, only taking over again for the landing.

The aircraft – a 19-seat propeller-powered business plane – was not merely on autopilot. It tested the detect-and-avoid technology, which drones in civil airspace will need to have to ensure they keep their distance from other air traffic and automatically undertake collision-avoidance manoeuvres.

The algorithm that runs this technology has been thrashed out with air-safety experts at the UK Civil Aviation Authority who have ensured it sticks to the “rules of the air” understood by pilots worldwide.

To test the system, fake objects to avoid were introduced to the flight computer, says Lambert Dopping-Hepenstal at BAE Systems, programme director for ASTRAEA.

“Because we were in shared airspace, all the sense-and-avoid manoeuvres we tested used synthetic targets. Any changes to the flight route were communicated to the ground-based pilot by air traffic control, with the pilot then instructing the aircraft to amend its course accordingly,” he says.

Jim Scanlan, one of the designers of the world’s first 3D-printed unmanned aerial vehicle at the University of Southampton, UK, is impressed. “I think it’s great. It’s good to see such progress in the UK – especially with the US hoping to open up its airspace to UAVs in 2015.”

The main thing ASTRAEA needs to get right is that sensing and avoiding capability, says Scanlan. “That’s the showstopper at the moment. Without a pilot they need a sensing system to replace the Mark 1 eyeball – one that can tell a hot-air balloon from a cloud.” 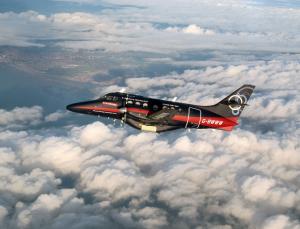