Positioned on a peninsula that extends into the sparkling Mediterranean, the Nice Cote d’Azur International Airport is found 3 miles southwest of central Nice. It’s the third busiest airport in France after Paris’ Orly  and Charles DeGaulle Airport. The main airport on the French Riviera offers many services and amenities for both private jets and commercial travelers. This favorite stop is a top for private jets flying in from Europe and the globe. Whether you’re planning air travel to Nice, helicopter transport to Monaco , or other French Riviera destinations.

When you fly with JetOptions Private Jets, we offer you the top aircraft choices from our ARGUS and Wyvern planes fleet. You can book the Riviera with confidence, from the most luxurious planes to ultra-long-range jets that travel nonstop to and from airports worldwide.

Fly in and out of the second-largest city on the Mediterranean coast to France’s second most visited city after Paris. More than 4 million visitors to Nice each year, enjoying miles of beautiful coastline. The Promenade des Anglais stretches for 3 miles with stunning architecture, five-star hotels, restaurants and nightlife, and the ever famous Neptune Beach. Within the historic city lies the Matisse Museum, the 17th-century Monastery of Notre Dame de Cimiez, and one of the most beautiful examples of Russian Orthodox architecture at the Saint-Nicolas Cathedral.

The events calendar for the South of France is complete over the spring and summer seasons. Visit top private jet charter events like the Monaco Grand Prix, Cannes Film Festival, Art Monaco, and the Yacht Show.

Nearby non-international airports include the Monaco Heliport, Cannes-Mandelieu Airport, and the La Môle – Saint-Tropez Airport.

The airport covers a total area of just 1.43 square miles. There are two parallel runways with a capacity for 26 aircraft landings per hour. In Terminals 1 and 2, the passenger count was nearly 14 million in 2018, nearing the airport’s maximum capacity. Make your reservations with us early, as some private jets also utilize Terminal 2 for passenger services.

FBOs: There are many fixed base operators (FBO) at NCE in the private general aviation terminal. On the ground, they offer passenger customs and immigration services, vehicle and helicopter transfers, aircraft services, and all supporting services for your private jet.

If you’re traveling to or from Nice and the French Riviera and want to fly with luxury and style, look no further than the industry-leading services at JetOptions. Fly with ultimate safety on an ARGUS and Wyvern-rated fleet of planes. Request your flight quote online, or call us and get started on your next trip to Nice and the South of France today. 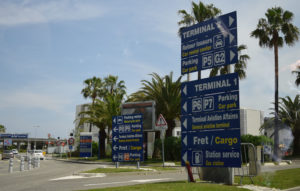