The latest flagship in the Dassault Aviation Falcon family is the 8X. This long-range heavy jet has been redesigned and improved from its predecessor, the Falcon 7X. Dassault‘s luxury aircraft has an extended fuselage of 43 inches, and this extension has translated itself to a larger galley, more legroom, or even an optional steam shower.

This competitor to Bombardier Global Express and the Gulfstream 650ER has the high-performing tri-jet configuration that allows for a range of 6,450 nautical miles. Flying at Mach .8, these lighter wings will allow for eight passengers to travel nonstop from Hong Kong to London or from Beijing to Los Angeles. This wing redesign also means a quick stop on runways in just 2,220 feet at max payload. 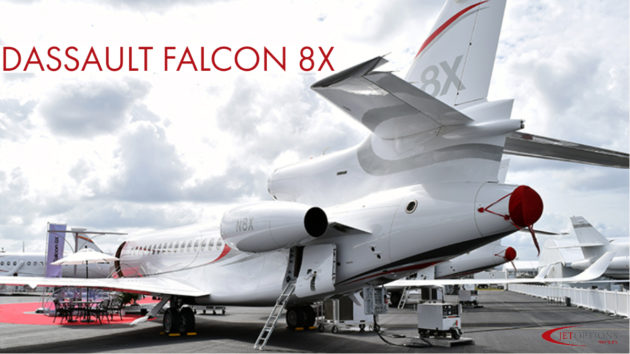 History of the Falcon 8X

For nearly a century, the Dassault Aviation Group has been manufacturing airplanes and fighter jets from their headquarters in France. Founded in 1929, the aerospace company currently manufactures fighter jets and civilian aircraft under their Falcon model family.

The Falcon 8X is a derivative model of the Falcon 7X and has taken many of its key elements in its design. A new wing with reduced weight was introduced at EBACE in 2014, the first flight took place in 2015, and the jet was FAA and EASA flight certified in 2016.

The Dassault Falcon 8X has the following flight and cabin specifications:

With its three engines, the Falcon 8X flies faster to most every destination, including transoceanic flights. They also add to the 8X’s slow and stable approach capabilities, and these performance margins allow takeoffs from shorter runways.

In 2019 the 8X broke the coast-to-coast speed record going from Santa Monica Municipal Airport to New York Teterboro in 4 hours and 28 minutes – faster than the previous record by 24 minutes. Especially notable was the reduced runway length departing Santa Monica. In 2019 the SMO runway was shortened from 5,000 feet to 3,500 feet in length. Like the rest of the Falcon’s, the 8X is certified to fly from the most challenging flight paths, including London City Airport and Eagle, Colorado.

The extended cabin of 42′ 6″ is used to advantage with over 30 possible configurations. Select from an enlarged galley, extra seating space in the cabin, expanded forward lavatories, or additional spa finishes in the rear lavatory.

Noise is reduced, and cabin pressure is a low 3,900 feet at 41,000 feet cruising altitude. Air quality is high, with added humidity of 20%. Wi-Fi connectivity is complete as jets are equipped with the FalconCabin HD+ cabin management system.

There are more cabin windows, four more than the 7X, for a total of 33 for added natural light throughout the fuselage. There are 25% larger galleys with expanded chill drawers and refrigerators for inflight service of 14 hours. Opposite the galley, a crew rest area converts crew to a closet for added storage.

There’s the option of a roomy VIP stateroom at the rear of the aircraft that converts to a media room finished with pop up 32-inch TV screen – or an aft shower and lavatory – while the third lounge area is retained. The mid-cabin zone has places for a six-seat conference grouping. Up to six passengers can use sleeping berths on overnight trips.

The 8X improved on the innovations and flight style that made the 7X successful, with more efficiency and luxury on-board.