Cessna holds the distinction of having sold more airplanes than any other company in history. After looking at their Citation family of jets, it’s not hard to see why. The company has made a name for itself by combining high-performance with safety and comfort, which is why their planes have become so popular with pilots and passengers alike. While their fleet is full of examples, the Cessna Citation CJ3 may be one of their best.

The Cessna Citation Family of Jets

The CJ3 is part of Cessna’s Citation family of business jets, which the company began manufacturing back in 1991. This plane, also known as Model 525B, is a longer version of the CJ2 (Model 525A). The entire Cessna Citation family tree includes many more models, though, and goes all the way back to 1972, when the original 500 Citation I was released. Since then, Cessna has manufactured nearly 40 different versions, which speaks to the popularity of this particular family of jets. 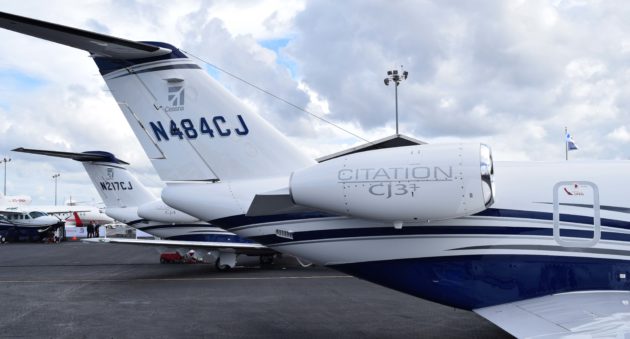 Specifications for the Citation CJ3

That last number is worth noting as the Cessna Citation CJ3 is an extended version of the CJ2. Passengers enjoy more room for themselves but also for their luggage, as well. However, it’s the craft’s twin Williams FJ44-3A engines that tend to make the CJ3 popular with pilots. The added power allows the plane to take off from a variety of popular airports (e.g., La Guardia, JFK, etc.) that aren’t possible for other jets in its class. Depending on the load, many pilots have even reported climbing directly to the CJ3’s service limit of 45,000 feet. This added power also gives passengers an extremely comfortable ride, even when the weather is bad. In places like Vail and Aspen, where the snow can be a real problem for other jets, pilots have no problem taking off and landing the Citation CJ3.

From Texas to France with Only One Stop

Recently, a Cessna Citation CJ3 outfitted with active winglets made by Tamarack Aerospace Group was able to complete a trip from Paris, Texas to Paris, France with only one stop. The first leg of the voyage lasted 5 hours 42 minutes before stopping in St. John’s, Newfoundland. The second leg took just 5 hours 45 minutes. The entire trip was made at max load.
Although this may not be representative of the typical performance for the average CJ3 model, the trip did prove how well-designed and manufactured these jets are.

Of course, most passengers choose the Cessna Citation CJ3 because of its interior. As we mentioned above, this jet is an extended model, which makes for a very spacious cabin at 20 feet, 10 inches long. The six seats (which can be reconfigured to accommodate eight people) are long-legged, so they take full advantage of the added room. These club seats are positioned in a center-style design with three on either side of the aisle.

Speaking of the aisle, the Cessna Citation CJ3’s sits slightly lower than the seats, giving the impression of even more room in the cabin. This trait also makes it easier for passengers to move around the jet by extending the height of the aisle to 57 inches. With 14 elliptical windows, the Cessna Citation CJ3 provides passengers with plenty of natural light. However, there is also an indirect LED lighting system, so visibility is never an issue, day or night.

Cessna outfitted this jet’s cabin with an improved compressor, ensuring passengers enjoy an efficient heating and cooling system that quickly responds to their desired temperature.  Altogether, the various baggage compartments give the CJ3 65 cubic feet of storage space.

The Citation CJ30 Is Another Big Win for Cessna

Everyone should enjoy a trip in the Cessna Citation CJ30 at some point. Aside from its operational efficiency, this light business jet offers passengers a comfortable ride with no small list of luxury accommodations. Be forewarned, though, after just one flight, you may never want to fly in any other craft.