MEBA 2012 closed today at Dubai World Central’s Al Maktoum International Airport with a record number of show attendees–more than 7,000, according to show host Middle East Business Aviation Association (MEBAA). There were 34 aircraft on the static display, conveniently located on the ramp just outside doors at the end of the exhibit hall and flanked by major companies’ chalets. Although the plan was to hold the MEBA show inside a purpose-built exhibition hall, that building is still under construction, so the show took over the new airline terminal building at Al Maktoum. MEBA 2014 will be in the new facility, as will next year’s Dubai Air Show. While the shape of the terminal made for an unusual layout for exhibitors, the result was a favorable flow of visitors, with people funneling past the stands in what seemed like a steady stream. The only somewhat universal complaint about MEBA 2012 was the site’s distance from downtown Dubai. But the prospects for the Middle East business aviation market are why both exhibitors and attendees ventured to the outskirts of Dubai at the DWC site; this market is currently worth $493 million and is expected to reach the $1 billion mark by 2018, according to Ali Ahmed Al Naqbi, founding chairman of MEBAA. “Quite simply,” he said, “there is huge growth potential here.” Read digital editions of AIN’s three on-site issues. 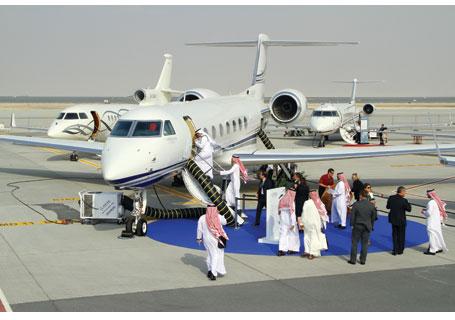