Under a bright, azure sky, the ninth annual Latin American Business Aviation Conference & Exhibition (LABACE) opened this morning in São Paulo, Brazil, to the sound of business aviation hard at work in a region of the world where the industry sees a long-term bright future. More than 75 airplanes crowded the static line at Congonhas Airport, from single-engine turboprop business aircraft such as Cessna’s Grand Caravan and the Pilatus PC-12 to bizliners such as the Airbus ACJ318 and, for the first time at the show, an Embraer Lineage 1000. Some 170 exhibitors are at the show, and the number of visitors is expected to surpass last year’s record of 15,420 by about 15 percent. This despite the fact that the show organizers—Brazilian business aviation group Associacao Brasileira de Aviacao Geral (Abag)—raised the admission price for the second year running. Headlining the opening general session and official ribbon cutting were Brazilian Secretary of Civilian Aviation Wagner Bittencourt de Oliveira and other distinguished guests from the civil and military government, along with Abag chairman Eduardo Marson. Brazil, with LABACE as its heartbeat, is rapidly becoming the center of business aviation in Latin America. According to information in the second Yearbook of Brazilian General Aviation, published by Abag and released today at LABACE, as of 2011 there were 623 business jets in service in Brazil, up by 77 aircraft from 2010, and 1,654 helicopters, 159 more than two years ago. 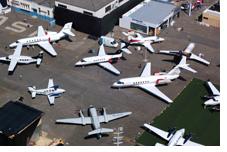