Jackie Chan is reportedly extremely possessive about his new toy, a US$30 million private jet.

The jet was available for viewing for a limited time when it was on display at the Singapore Airshow in February.

Chan has stated that family members and friends are not allowed to fly the plane without him.

He also hired two assistants to guard the jet while it was displayed at the Asian Business Aviation Conference and Exhibition in Shanghai from March 27 to 29.

Chan’s strict rules for having the plane on display included the following:

Jackie Chan bought a Legacy 650 and you can charter one from Gus Lira at JetOptions at any time. 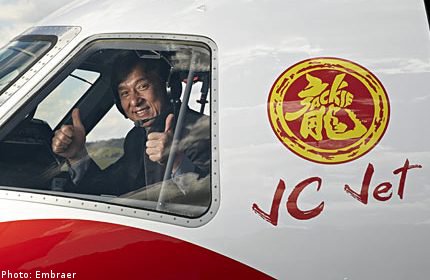