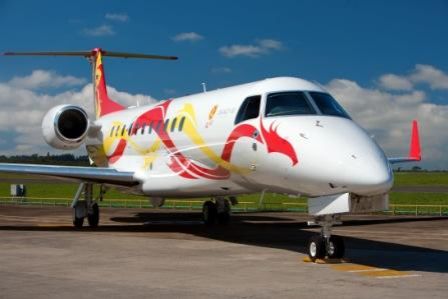 The Chinese Year of the Dragon is off to an auspicious beginning, at least for Jackie Chan, who took delivery of his Embraer Legacy 650 late last week. The aircraft, which is adorned with dragons and Chan’s personal logo emblazoned on the tail, is the first Legacy 650 to be delivered into China. Chan will also serve as the official brand ambassador to Embraer, promoting its entire line of aircraft in the China market and globally. The ebullient actor, singer and cultural icon toasted the company’s executives as they stood together in front of the plane customized with Chinese colors of red and yellow and the name “Jackie” painted on the tail.

The Legacy 650 has a range of 3,900 nautical miles (7,223 kilometers) and can fly four passengers nonstop from Beijing to Dubai or from Hong Kong to Adelaide, Australia. It sells for about $30 million.