HyperMach Aerospace unveiled plans for its 20-seat SonicStar V-tailed, supersonic business jet yesterday at the Paris Air Show. Company CEO Richard Lugg claims the Mach 3.6 aircraft will take no more than one hour 45 minutes to fly from Paris to New York. The SonicStar is scheduled to fly in 2021, with certification possible, but not promised, by 2025. HyperMach did not give a firm price for the new airplane during yesterday’s press conference, but Lugg told AIN today that the SonicStar would cost more than $100 million each. The key enabling technology includes the SonicBlue S-MAGJET five-stage electric-turbine hybrid supersonic 4000-X series engine (Lugg is also chairman of Portland, Maine-based SonicBlue). The company claims the S-MAGJET will have a specific fuel consumption of 1.05. Another enabling technology includes a magnetic spike on the nose that uses plasma waves to dampen the sonic boom. The idea is that there will be two shock waves as the aircraft approaches supersonic speeds; the second wave will have greater pressure and will partially mitigate the impact of the first. HyperMach is still seeking investors and partners. 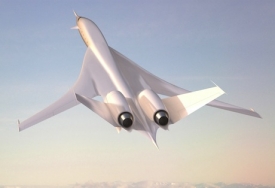