How do the 1% travel in private jets? Below you will see the findings from NetJets 2013 annual report. Dassault has added a second Falcon 8X to its test fleet. A Textron executive says that the China joint venture with Cessna was a good decision. Embraer delivers the 100th jet of the Phenom family, and a look at how private jets and the business jet market are doing in China.

How the one percent travel: American men take the most flights aboard private jets while Moscow to Nice is the busiest route

It’s a privilege reserved for a lucky few but now experts have revealed exactly who is getting on board when it comes to private jets.

The spotlight has been shone on the industry’s latest marketing statistics – identifying Americans as the most frequent flyers while the busiest route is between Moscow and Nice. 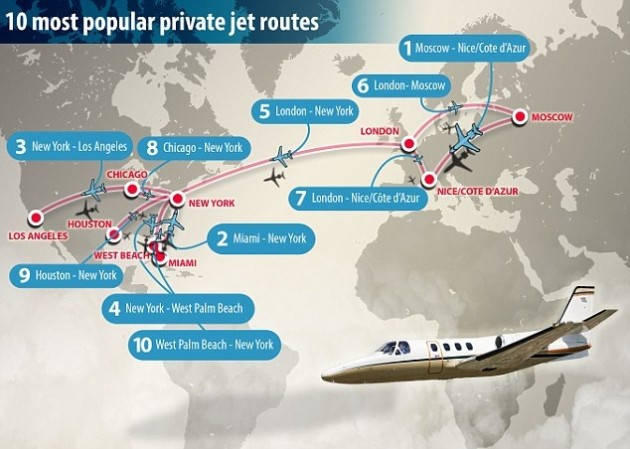 Billionaire entrepreneurs, chief executives, and A-list celebrities are amongst the exclusive clientele, found to be 80 per cent men.

Aviation provider NetJets – which has the largest private jet fleet in the world – announced the findings of the annual report for 2013.

Users of the luxury crafts, which often boast private bedrooms, fine-dining facilities, and the odd cinema, are typically private entrepreneurs, aged between 40 and 55.

The aircraft provider said the United States remains the world’s leading private jet market with 60 per cent of global traffic starting and ending there.

Continue reading about how the 1% travel on DailyMail.co.uk>> 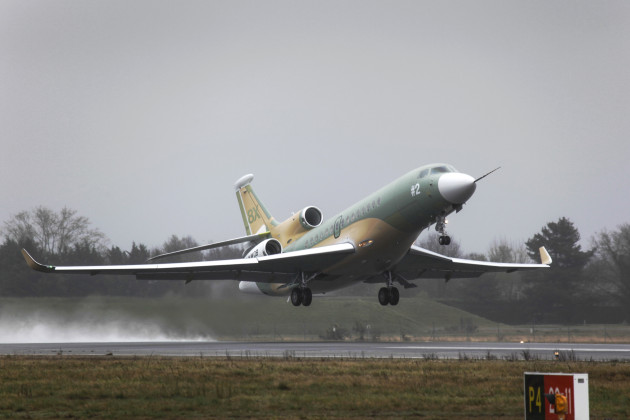 Falcon 8X s/n 02 took to the skies from Dassault Aviation’s Bordeaux-Mérignac facility on Monday, March 30 at 3:24 PM local time with test pilots Hervé Laverne and Etienne Faurdessus at the controls. The flight plan was similar to that of the maiden flight on February 6.

After initial checks on the digital flight controls and engine system, the pilots took the aircraft to 43,000 feet and Mach 0.8 for performance tests. After the test routine, the aircraft ran a series of additional checks before touching down after 2 hours and 45 minutes in the air. 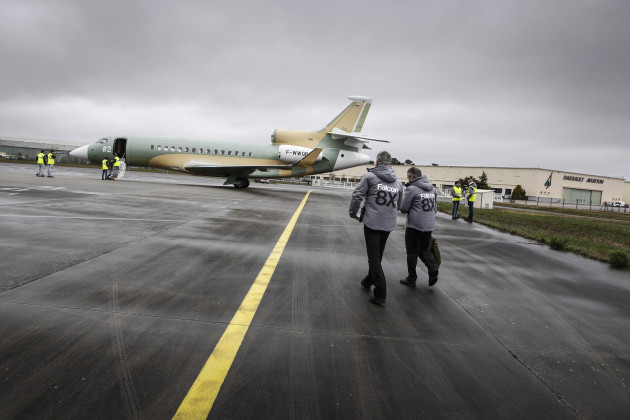 “We are very pleased with the way the aircraft responded and flew,” said Laverne. “It demonstrated the same flawless handling qualities as s/n 01, a very positive development at this early stage of the flight test campaign.”

The aircraft will now join s/n 01 at the Dassault flight test center at Istres, near Marseille, where it will mostly serve for performance testing.

The full program will total about 200 flights and 500 flight hours through final EASA and FAA certification which is anticipated in mid-2016.

Three years after forming joint ventures for two aircraft in China, Textron Aviation officials say they are pleased with the progress as they work to expand capabilities.

In late 2012, Cessna Aircraft, now a division of Textron Aviation, forged separate joint aircraft completion ventures with China Aviation Industry General Aircraft Co. (Caiga). One was for Cessna Caravan turboprops in Shijiazhuang. The other, in Zhuhai, was for Citation XLS+ business jets. 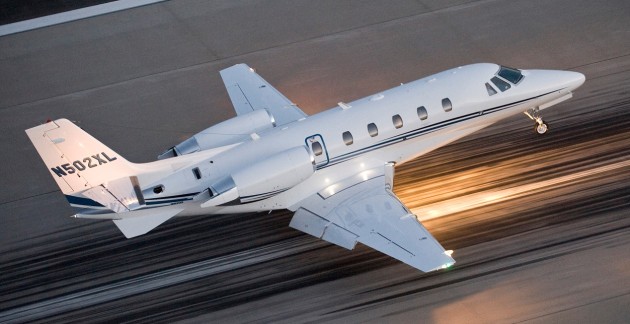 “We feel like we’ve made a good decision,” says Bill Schultz, Textron Aviation senior vice president for business development in China. “The partnerships gave us opportunities that wouldn’t have been there if we had done this alone.”

Continue Reading about Textron in China on www.aviationweek.com »

Embraer Executive Jets said it has delivered the 100th Phenom family jet produced in Melbourne, FL, just over three years after the first aircraft rolled off this facility´s assembly line.

The commemorative aircraft, a NetJets Signature Series Phenom 300, was delivered to Berkshire Hathaway company NetJets Inc. and will be part of the company´s European fleet.

NetJets and Embraer signed an original purchase agreement for 50 Phenom 300 firm orders and 75 options, in October 2010. The total value of the deal may exceed USD1 billion, if all options are exercised. In December 2014, an agreement to convert 10 Signature Series Phenom 300 purchase options into firm orders was signed by both parties. Embraer has now delivered 40 Signature Series Phenom 300 to NetJets. These aircraft operate in the NetJets fleet, with fractional owners in the US and Europe.

Compared with most of the aerospace and aviation industry, business aviation is not very political. While other sub-sectors struggle with political influence even when a government is not the buyer, business jet makers mostly sell their products in deals too small to attract attention, a bit like the car industry. And their customers’ use of the aircraft is, for the most part, a purely private matter.

Well, that is not true in China just now, where politics are front and center for business aviation. Probably the biggest question here for manufacturers is how long Beijing will maintain an anti-corruption drive that has frightened rich Chinese away from private jets flying. When showing off a jet is no longer asking to be investigated, the theory goes, the buyers will come back.

The campaign is also hitting industry through the Chinese economy, geared as it is to corrupt ways of doing things. That is undermining the confidence of potential buyers who are not fearful of investigation. But economics should have been a quite secondary factor in last year’s decline in Chinese demand for business aircraft. Gross domestic product is, after all, still expanding at about 7% a year, so there should be a good deal more money available for buying private jets, not less.

Continue Reading about business jet sales in China on www.aviationweek.com »

There are plenty of billionaires in China, but increasingly their business aircraft are not. Last year’s trend to register private jets away from mainland China is continuing this year, say industry officials, reinforced by the growing habit of not seeking a local domicile for new aircraft.

These measures are probably helping the faint improvement in demand that some people in the industry are reporting for recent months. Still the companies that make business aircraft are dealing with a market that once presented an astounding opportunity but last year ran into the brick wall of China’s anti-corruption crackdown.

Airbus figures for the number of billionaires in the growth markets of China, Russia and the Middle East illustrate well just how big that opportunity should be. By 2017, China should have almost as many billionaires as the U.S., Airbus says, relying on studies by Ledbury Research. At the same time, China has about 2% of the business aircraft that are registered in the U.S.  Importantly, the number of China’s billionaires has been multiplying much faster than for the Middle East and Russia. And the 2017 forecast number for China of 1,040 is 4-5 times higher than for the other two regions (see graph). 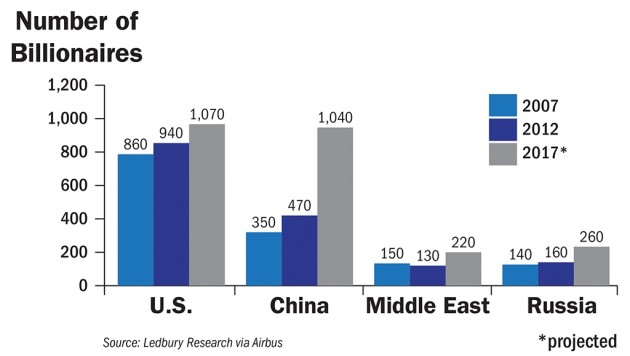 Continue Reading about the business jet market in China on www.aviationweek.com »