Honeywell says over 9,000 new business jets will be delivered in the next decade

Honeywell’s 22nd Business Aviation Outlook predicts that up to 9,250 new business jets valued at over $250 billion will be delivered from 2013 to 2023. The business aviation industry will grow by 4-5 per cent over the next decade, according to a forecast from Honeywell.

Although these figures reflect slightly lower unit deliveries than in last year’s report, Honeywell is predicting a 3-4 per cent increase in delivery value compared with the company’s 2012 forecast due to pricing increases and more demand for expensive, large-cabin business jets.

Honeywell forecasts that the number of new business jets delivered throughout 2013 will be somewhere between 600 and 625, which is down on the 653 deliveries that Corporate Jet Investor predicted in May and down on the 672 business jets that were delivered in 2012. However, Honeywell attributes this to programme delays rather than falling demand.

Looking ahead to 2014, the company predicts a better picture for the industry. “2014 industry deliveries are anticipated to be up modestly, reflecting recovery in supply side constraints and some gains linked to the projected pace of global economic recovery,” says Rob Wilson, president of Honeywell Business and General Aviation.

Honeywell’s research finds that aircraft operators plan to replace around 28 per cent of their fleets with new business jets in the next five years, with 19 per cent of these purchases being closed by 2014. 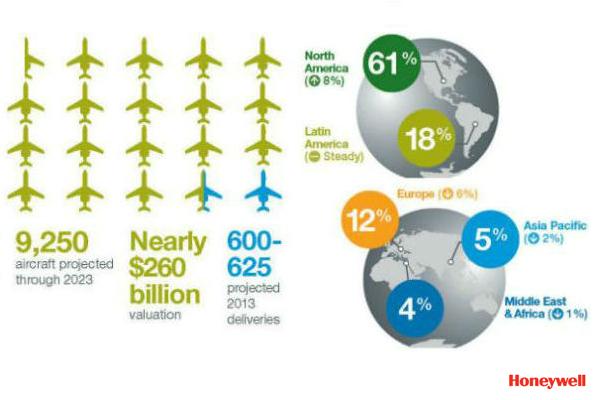