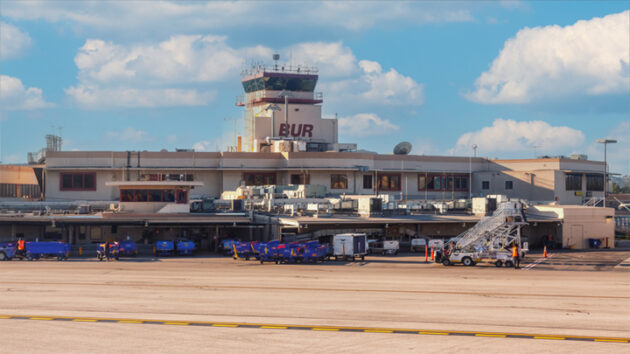 If you’ve been dreaming of an alternative to lengthy security lines, cancellations, and modern flight challenges associated with commercial airlines, you’ve come to the right place. JetOptions provides state-of-the-art private jet charters worldwide, including preferred public airports like Hollywood  Burbank International Airport, BUR. Whether traveling to or from L.A., our elite services will not be missed and allow you to fly in the luxury, style, and comfort you deserve.

Hollywood Burbank International Airport changed its name from the Burbank Bob Hope Airport in 2016 and saw over 2 million passengers passing through its doors each year.

Hollywood Burbank Airport is located 3 miles northwest of L.A.’s downtown Burbank and serves the northern part of Los Angeles, including the San Fernando Valley, Pasadena, and Glendale. It’s also much closer to Hollywood and Griffith Park than Los Angeles International Airport (LAX). It is the only airport directly connected to downtown Los Angeles by a rail connection. The airport used to be located entirely within the city limits of Burbank; since Runway 15/33 was extended at the north end, KBUR now extends slightly into Los Angeles.

KBUR boasts two runways, with most flights taking off from Runway 15 and landing on Runway 8. There are two fixed-base operators (FBO) terminal facilities with 24 hours of service daily. With amenities for travel into Los Angeles and the surrounding cities, including town cars, limousines, and rental cars.

FBOs: There are 2 fixed-based operators located at Hollywood Burbank, and with a full range of services provided, it enables BUR to be among the top of L.A.’s private jet airports.

Are you traveling to or from Los Angeles and want to go in luxury and style? Then look beyond the elite, industry-leading services we offer at JetOptions. Request a quote online or call us to find out more and see how efficient our private jet services are. At our L.A. private jets destinations page, fly to your choice of airports in and around Los Angeles, including Van Nuys, LAX, Long Beach, Santa Monica, and more.

Burbank was initially opened in 1930 by the United Airports Company of California, Ltd, called United Airport. During this time, it served as a base for several of Amelia Earhart’s flights and other pioneering aviators. Then, in 1934, its name was changed to Union Air Terminal, before changing again in 1940 to become Lockheed Air Terminal after it was purchased by the
Lockheed Aircraft Company.

This name remained for 27 years until it became Hollywood-Burbank Airport. Over the next 50 years, it went through several more name changes, including the Burbank-Glendale-Pasadena Airport (1978) and the Bob Hope Airport (2003), before going back to Hollywood Burbank Airport (without the hyphen this time, though!) in 2016.