The Cessna Citation M2, a CJ1+ derivative announced in late September at the NBAA Convention in Las Vegas, flew on Friday from the aircraft manufacturer’s headquarters at Wichita Mid-Continent Airport. According to Cessna, the M2 prototype’s inaugural flight lasted a little more than 1.5 hours and included tests of its Garmin avionics, autopilot, Williams engines and aircraft systems. “The aircraft performance, handling characteristics and Garmin G3000 avionics were exceptional, just as we had anticipated,” said Peter Fisher, the Cessna engineering test pilot who flew the Citation M2. “With this essential program milestone complete, we are looking forward to a successful flight-test program and FAA certification so our customers can soon enjoy this great aircraft.” The twinjet derivative will fit into the Citation line as a step-up for Mustang owners or as a higher entry-level Citation between the Mustang and CJ2+. Using the CJ1+ airframe as its platform, the new variant features the Garmin G3000 avionics suite, 1,965-pound-thrust Fadec Williams FJ44-1AP-21 engines, subtle winglets and, compared with its predecessor, better interior furnishings and greater speed. FAA certification is scheduled for the second half of next year, with entry into service by the end of next year. 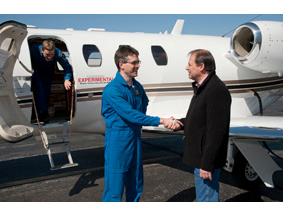