Hawker Beechcraft secured more time to solve its debt problems through a restructuring plan, with lenders granting a 90-day forbearance agreement. The move staves off the immediate threat of a filing for Chapter 11 bankruptcy protection–a move that has been widely expected by industry analysts. The manufacturer, which is owned by Onex and GS Partners (a division of investment banking giant Goldman Sachs), announced it had “reached an agreement with certain lenders that will provide the company with approximately $120 million of additional liquidity.” As part of the agreement, lenders currently holding approximately 70 percent of Hawker Beechcraft bank debt will defer the company’s obligation to make certain interest payments on the company’s senior secured revolving and term loans, when due. In addition, lenders also granted Hawker Beechcraft relief from certain existing loan covenants. This forbearance agreement is scheduled to expire on June 29, the company said. “This step keeps the wheels from falling off the company long enough to development a thoughtful restructuring plan,” noted business aviation industry consultant Brian Foley. In the meantime, the company is operating normally and continues to sell, deliver and service aircraft, as well as perform its other various activities. 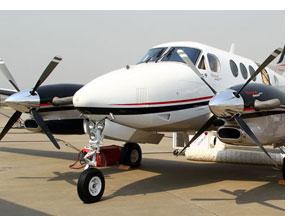