The number of fatalities from business jet accidents in the first nine months outpaced those from the same period last year, despite a decline in the number of nonfatal accidents for jets and turboprops this year.

According to preliminary statistics compiled by AIN, 15 people died in four accidents involving U.S.-registered business jets in the first nine months of this year. In the same period last year 13 people were killed, also in four accidents. All eight of the fatal accidents in the two periods befell jets operating under Part 91.

Business aircraft activity in the U.S. increased for the 10th straight month, climbing 3.9 percent last month versus a year ago, making it the busiest September for business aviation since the same month in 2008, according to data released today by aviation services company Argus. For this month, Argus estimates that flying will increase by 0.9 percent year-over-year.

Operational categories were positive across the board, led by Part 91 flying, which climbed 4.0 percent last month versus a year ago. Part 135 charter flight activity grew by 3.8 percent year-over-year, while fractional flying increased by 3.1 percent.

Globe-girdling Gulfstream G650ER Gets Its Wings

The world’s longest-range business jet–the Gulfstream G650ER–was certified this week by the FAA, the Savannah, Ga.-based aircraft manufacturer announced yesterday. Gulfstream Aerospace revealed the 7,500-nm business jet in May at EBACE and expects to deliver the first fully outfitted G650ERs to customers by year-end, a few months ahead of previous delivery date projections.

Gulfstream Aerospace Corp. announced that its flagship Gulfstream G650ER has been certified by the Federal Aviation Administration. The certification verifies the airworthiness of the aircraft’s design and clears the way for G650ER deliveries to begin. 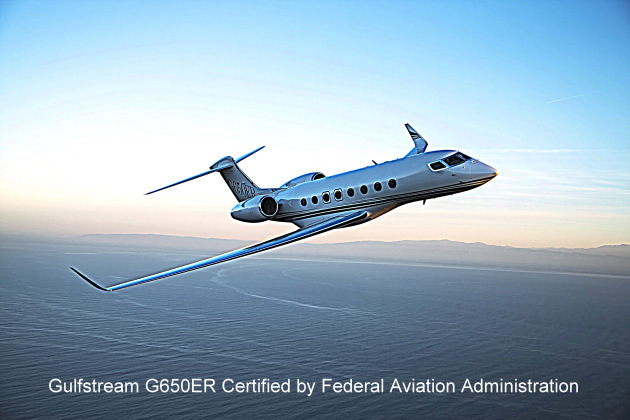 Gulfstream announced the ultra-long-range aircraft in May and expects to deliver the first fully outfitted G650ER business jets to customers before year-end, ahead of the projected 2015 delivery date.