Gulfstream Aerospace unveiled its new “Elite” interiors for the G550 and G450 at the NBAA Convention this week in Las Vegas. The extra-cost its package incorporates much of the clean-lines look, feel, and functionality of the interior the company developed for its ultra-long-range flagship G650. “The Elite package is built on the brand DNA of the G650,” said Gulfstream president Larry Flynn. The package includes the new wireless Gulfstream Cabin Management System (GCMS); LED lighting; and high-tech looking galleys. The GCMS provides complete digital cabin control through on-board touch screens, touch switches and passenger controls units, as well as via passengers’ mobile devices loaded with the GCMS app. Meanwhile, the 27-inch wide executive club seats are all new and feature telescoping headrests, one-touch full-flat berthing and electric lumbar controls. The sidewall tables and the cabin monuments also have the look and functionality of their counterparts aboard the G650. Initially, Elite interiors will be installed at Gulfstream Savannah. On the G450, the Elite package costs $1.5 million. While the Elite is an interior “package,” Gulfstream stressed that customers would still be able to choose from a very wide variety of textiles, leathers and finishes. 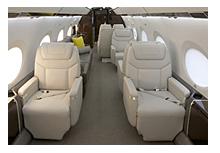