General Dynamics reported third-quarter earnings yesterday, and chairman and CEO Jay Johnson said the company’s aerospace group–Gulfstream Aerospace and Jet Aviation–saw “continued emerging market customer interest and improved aircraft service volume” in the quarter. Gulfstream’s sales in the period were $1.4 billion, “driven by more aircraft deliveries [both green and completed airplanes] and higher services volume when compared with the last quarter.” Emerging-market demand was credited with driving Gulfstream orders and represented about 50 percent of the order book. Included in that emerging market activity was a firm order for 20 Gulfstreams from Chinese aircraft leasing company Minsheng. A positive 1.5 book-to-build ratio resulted in a $300 million increase in the backlog value, bringing the total to $18.6 billion. Johnson said Gulfstream anticipates provisional certification of the G650 “in the next several weeks” and plans to deliver 10 to 12 green aircraft before year-end, with entry into service of outfitted G650s beginning in the second quarter. He also noted that Jet Aviation’s service-related revenues continued to grow in the third quarter, with volume up nearly 16 percent. For the full year, he said, “I expect the aerospace group’s sales to be up approximately 13 percent and operating margins to be around 15 percent.” 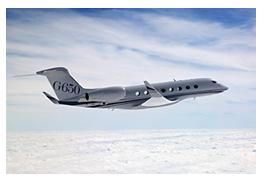