Business aviation is evolving constantly and we always keep up to date with training, education, and news about our industry to better serve our clients. Here are some of the business aviation news articles and stories from around the world that grabbed our attention this week ending November 11th, 2016:

Bombardier Business Aircraft today announced that its segment-defining Global 7000 aircraft program completed the successful maiden flight of its first flight test vehicle (FTV1). This first flight marks the start of a flight test program for the newest member of Bombardier’s flagship Global aircraft family, which is scheduled to enter into service in the second half of 2018.

The Global 7000 flight test vehicle took off from Bombardier’s facility in Toronto under the command of Captain Ed Grabman, assisted by his co-pilot, Jeff Karnes and Flight Test Engineer Jason Nickel under clear conditions at 10:25 a.m. EST.

Dedicated to testing basic system functionality and assessing the handling and flying qualities of the aircraft, today’s flight lasted approximately 2 hours and 27 minutes, during which all flight controls were exercised, and the systems and aircraft performed as expected. The flight crew conducted a gradual climb to 20,000 feet (6,096 m) and the aircraft reached a planned test speed of 240 knots.

“The first flight is the culmination of an incredible amount of knowledge and experience from our dedicated employees, partners and suppliers,” said David Coleal, President, Bombardier Business Aircraft. “This is a very proud moment for Bombardier and confirms the Global 7000 aircraft program development is on schedule. It is the industry’s most innovative and uniquely designed business jet and the only aircraft on the market to offer four living spaces for unparalleled comfort and flexibility, creating an unforgettable experience for our customers. The Global 7000 business jet’s impressive capabilities promise to establish a whole new category for large business jets,” he added.

“This is a great day for Bombardier and a very proud moment for the thousands of employees who made this significant milestone a reality,” said Michel Ouellette, Senior Vice President, Global 7000 and Global 8000 program, Bombardier Business Aircraft. “Hard work and dedication from the entire team, including our suppliers, went into this amazing milestone of the development program. With today’s first flight successfully completed, all teams remain focused on meeting the program’s development and certification schedule and the aircraft’s entry-into-service in the second half of 2018.”

Continue reading about the Global 7000 maiden flight on Bombardier.com->

What You Need to Know Before Flying on a Private Jet

Booking private jets via an app has become popular in recent months. But here’s what to know before you buy.

A private flight at the tap of an app: It all sounds so seductive. But can the world of mobile technology really help to bring private flights to a mass audience, at a cost that isn’t that much higher than a first-class airline ticket? Not quite. While there’s something more to this than just hype, experts say we’re still far from the day when this side of aviation will be open to mass consumption. “You hear a lot about the ‘Uberization’ of the industry. “But that’s a big misconception.” 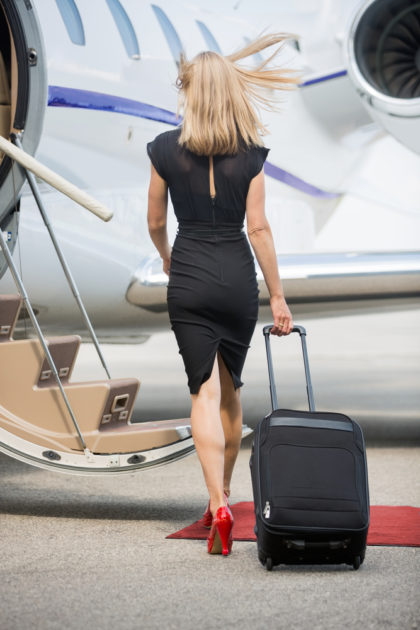 And while booking a private flight on a smartphone sounds appealing, the process may be lacking critical information. After all, it’s not like using a search engine to compare commercial flights: “You will see disappointments if you are just going on a picture of the airplane and the price,“ Tivnan says. The pool of private aircraft available for charters is far more varied than that of the typical commercial airline, encompassing dozens of models, ranging from lavish Gulfstream jets to tiny turboprops. For their part, industry executives acknowledge there’s a vast difference between experienced private jet fliers who have trusted contacts inside the business, to the more casual—or first-time—user.

“Of course, we recommend you charter your private jet with JetOptions”

Why Business Aviation Must Innovate to Drive Recovery

In business aviation, sales slumps are usually broken by the arrival of new products, which explains why most forecasts predict any recovery will occur after 2017. That aligns with the arrival of several impressive models, such as the Bombardier Global 7000, Cessna Citation Longitude, Gulfstream G500 and Pilatus PC-24. 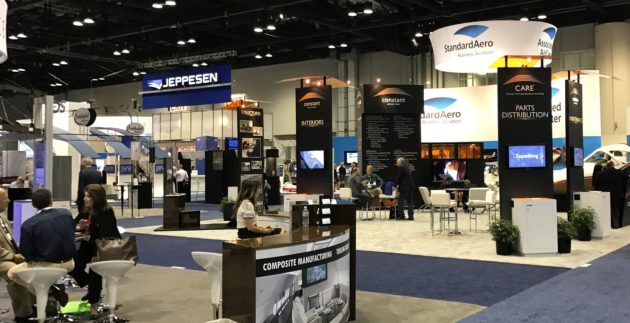 But relying on new products to stimulate demand doesn’t always work. Sometimes projects get delayed, and, even if they arrive on time, the market might not move. Since 2015, manufacturers have delivered the Citation Latitude, Dassault Falcon 8X, Embraer Legacy 450 and the Honda Aircraft HondaJet. Each features impressive performance and new technologies, yet the market in most regions has shrunk.

To drive a real recovery, the industry needs to come up with a better way of doing business: one less reliant on new metal. While improved aircraft are still necessary, the sector needs to do more to stimulate demand.

Continue reading about innovation in business aviation on FlightGlobal.com->

In the world of large-cabin business jets, there are Airbus Corporate Jet (ACJ) and Boing Business Jet—and then there’s everybody else. 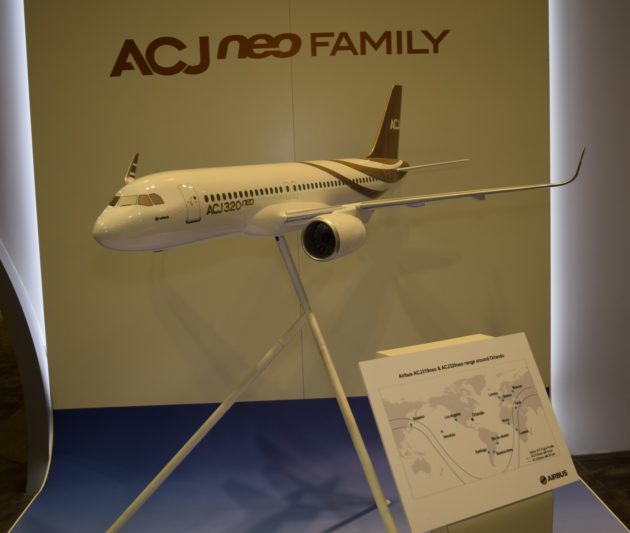 These are not the fastest or highest flying aircraft, but there is no question they redefine the meaning of ‘office in the sky’ and, in some cases, the sky’s-the-limit opulence achievable according to a customer’s personal preferences (and imagination). After all, they are highly customized derivatives of passenger jets flown by many of the world’s major airlines.

These flowing lines are represented in both the main pathway through the airplane’s cabin and the curved walls of zones within it. The approach also focuses on an environment that is quieter and better adapted to providing sound and vision in a home cinema setting. 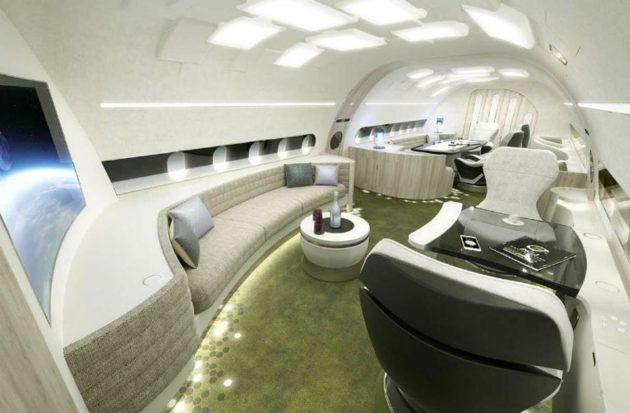 Airbus made extensive use of some of the latest technologies used in commercial and military aviation, such as weight-saving carbon fiber, in tables and cabinets and greater use of wi-fi. With a lighter cabin, Airbus was able to increase the range. In fact, both the ACJ320neo and the smaller ACJ319neo feature next-generation engines and wing tip sharklets for improved aerodynamics.

Continue reading about the ACJ cabin concept on Forbes.com->

The Canadian plane maker Bombardier has reported a lower than expected adjusted net loss and said it expects to finish the year with improved operating margins in all of its businesses.

The company raised the lower end of its full-year forecast for earnings before interest and tax(ebit) to US$350 million from $200m, while maintaining the upper end at $400m.

Montreal-based Bombardier forecast revenue of $16.5 billion for the year, compared with its previous forecast of $16.5bn to -$17.5bn, after the company in September halved the 2016 delivery forecast for its CSeries mid-range aircraft. 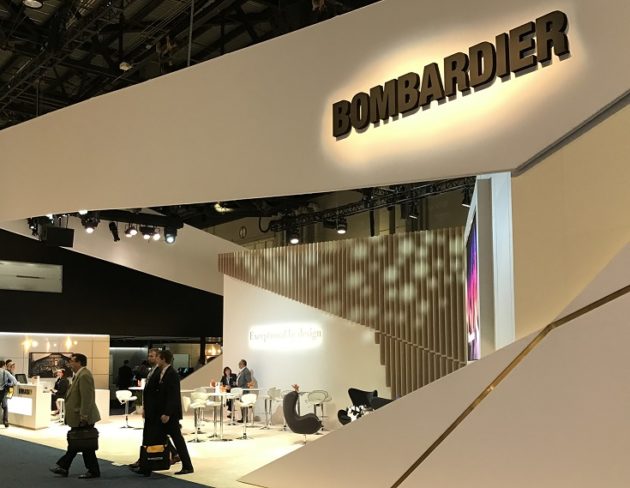 The CSeries programme, which has been hit by production delays and cost overruns, has received a $745m investment from the Quebec provincial government.

Canada’s federal government has agreed in principle to invest in the company’s CSeries programme, but a deal is yet to be finalised.Bombardier said last month it would cut 7,500 jobs, mostly in its train-making division, the second round of layoffs this year, following extended delays and budget overruns in its aerospace business.

Bombardier said last month it would cut 7,500 jobs, mostly in its train-making division, the second round of layoffs this year, following extended delays and budget overruns in its aerospace business.

Bombardier booked non-cash charges of about $4.4bn on its CSeries and Learjet 85 programs a year earlier.

Continue reading about Bombardier on The National->

Anyone who attended the recent National Business Aviation Association (NBAA) convention and exhibition could plainly see there’s no shortage of innovation going on across the entire sector—whether it’s in the form of new and improved designs of jets and turboprops or in any of the numerous systems that enable these aircraft to meet the transportation needs of the most discerning, hard-driving business executives.

No less striking, at least from this observer’s perspective, is the difference in how various OEMs (original equipment manufacturers) seem to have approached the business of developing and certifying new models. If the process were track and field, parallels with sprint, relay and long-distance running events wouldn’t be a stretch.

On one end of the spectrum, you have companies like Honda Aircraft Corp.—the marathon competitor. HondaJet is the culmination of founder Michimasa Fujino’s 30-year dream of bringing to market the world’s fastest, most advanced light jet. This week Honda announced its first speed records over two recognized courses: Teterboro, N.J., to Fort Lauderdale, Fl., and Boston, Mass., to Palm Beach, Fl.

Then there are the “relay” competitors—companies who have mastered the science (and art) of producing clean-sheet designs in close succession aimed at niche market segments. Embraer, with its Legacy 450 and Legacy 500, and Gulfstream Aerospace with its G500 and G600, come to mind. Embraer disclosed that Brazil’s civil aviation authority, the European Safety Agency and the FAA awarded certification of the Head-Up Display and Enhanced Vision System for both aircraft.