Newt Gingrich, whose quixotic presidential bid has been dogged by financial problems, racked up nearly $3 million in new debt for private jet flights, security consultants and travel costs in March even as his campaign teetered on the edge of collapse, according to new disclosures.

The former House speaker entered April with $4.3 million in total debt, up from $1.5 million the month before, according to reports filed late Friday with the Federal Election Commission. He raised $1.6 million, spent $2 million and reported having $1.2 million cash on hand.

The Gingrich campaign’s top debts for March include $1.1 million to Moby Dick Airways, a private air charter broker; $450,000 to Patriot Group, a Warrenton, Va.-based security firm; and $178,000 to Event Strategies of Alexandria for “event production.” Gingrich is listed as being owed $271,775.58 for travel costs, and numerous other employees and consultants claim similar travel debts, the records show. 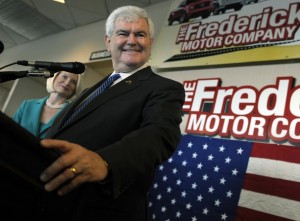