While general aviation aircraft billings rose marginally last year by 0.4 percent, to $19.1 billion, shipments declined by 3.5 percent to 1,865 aircraft, according to data released yesterday by the General Aviation Manufacturers Association (GAMA). This data omits fourth-quarter deliveries and billings for Hawker Beechcraft in both 2010 and 2011, since the Wichita aircraft manufacturer will not release fourth-quarter 2011 figures until late next month. Turboprop deliveries fell from 332 aircraft in 2010 to 324 last year, down 2.4 percent, while business jet shipments descended to 681, down 6.3 percent from 727 jets in 2010. Piston deliveries slid 1.5 percent to 860 aircraft. GAMA said the fact that percentage drops in shipments were constricted into single digits indicates GA is reaching a trough in this cycle. “A majority of the market fundamentals is moving in the right direction,” said GAMA chairman Caroline Daniels during a “State of the Industry” press conference yesterday. She added that corporate profits remain at record high levels, while the used market and flight activity made year-over-year improvements. Meanwhile, emerging markets are driving new sales. “Like last year, our greatest concern remains the lack of financing,” said Daniels, who is chairman and CEO of Aircraft Technical Publishers. “Latent demand in the market exists and an ease of credit markets could help boost our industry into positive growth once again.” 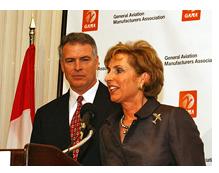